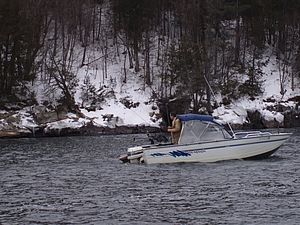 Suit up well and don a PDF before heading onto the water. Photo courtesy of VT Fish and Wildlife Department.

New York State boating laws require all persons aboard motorboats, canoes, kayaks, rowboats, and sailboats less than 21 feet in length to wear a personal flotation device (PFD) while on New York waters from November 1 to May 1.

New York implemented this PFD law in the fall of 2009 after a spate of deaths involving people who were not wearing life jackets while boating during spring and fall cold water temperatures.

Sudden immersion in cold water after falling overboard or capsizing, particularly at water temperatures below 68°F, can overcome even the strongest swimmers. It may lead to sudden cardiac arrest or gasping and inhalation of water, the loss of swimming ability and grip strength, and eventually hypothermia and unconsciousness.

While the law is specific to New York waters, Vermont officials are encourage all late fall anglers and boaters to suit up with a Coast Guard approved PFD.

“Warm fall sunshine can often give boaters a false sense of security,” said Vermont Fish & Wildlife Commissioner Patrick Berry.  “The reality is, water temperatures are dropping quickly, and people can find themselves at risk of exposure, hypothermia, or worse, if they suddenly find themselves capsized or in the water.”

“We encourage late fall anglers, duck hunters and all boaters to be cautious and safe while on any watercraft at this time of year,” said Berry.  “Wearing a life jacket, no matter what the season, is the single best way boaters can keep themselves safe on the water, and it can significantly improve their chances of survival if something unexpected happens while boating.”

Both New York and Vermont states require that children under 12 years of age wear a Coast Guard-approved personal floatation device at all times while boating. In order to any PFD to be considered properly worn, all straps and/or zippers must be tied or zipped.