Alewives were first found in the lake in 2003 and have since become a dominant forage fish. Recent winter kills of alewives have led to tons of rotting fish washing ashore after the ice has melted, but they do not seem to have impacted the lakewide population of that fish.

Fishhook waterflea were discovered in Lake Champlain in the fall of 2018. They are native to Eurasia, and have been present in the Great Lakes since the 1980s. This invasive is similar to the spiny waterflea in appearance, and also preys on native zooplankton while it is itself a poorer food source for fish. Fishhook waterflea have a long, distinctive spine with a loop at one end, much like a fish hook, that often tangles with other fleas as well as anglers' fishing line.

Spiny waterflea were first found in Lake Champlain in the summer of 2014. The species, originally from Northeast Europe, first appeared in North America in Lake Huron in 1984. In addition to competing with native zooplankton, spiny waterflea is much more difficult for small fish to ingest, thus a poorer food source. The long spines of these species can hook them onto anglers’ lines in the hundreds, making fishing difficult.

Eurasian watermilfoil has spread throughout the lake, creating a challenge and nuisance for swimmers and boaters. The closely related variable-leaved milfoil was discovered in Missisquoi Bay and in the South Lake since 2009.

In addition to invasive species, native species can sometimes become out of balance with the ecosystem. For example, sea lamprey are a native species whose populations are currently high enough to threaten the long-term wellbeing of other native species. The Lake Champlain Committee has worked to identify and develop means of controlling sea lamprey that minimize the use of pesticides.

Of the exotic species whose origin of introduction to Lake Champlain is known, more than 60 percent entered via canals, particularly the Champlain Canal at the southern end of the lake. Many more species stand poised to join them. The Hudson River has over twice as many exotic species as Lake Champlain; the Great Lakes host nearly four times more.

A horde of invasive species moves closer to Lake Champlain, ready to invade its waters. The following species are currently on the hot list, and the Lake Champlain Committee is working to reduce the chance that they will be successful.

Round goby: a fish species native to the Caspian and Black Sea regions. They were introduced to the Great Lakes probably from a ship's discharged ballast water, and first found in North America in 1990 in the St. Clair River. Gobies are bottom-dwelling fish that perch on rocks and substrate. They grow up to 10 inches long and have large heads, soft bodies and dorsal fins that lack spines. Often confused with sculpins, the round goby is distinguished by its fused pelvic (bottom) fin which forms a suction disk that allows them to anchor to the bottom. No fish native to North America has this feature.

Round gobies are predators of many native fish such as darters, sculpins, and logperch. Populations of some of these species have seen substantial declines in the St. Clair River. They also eat eggs and fry of lake trout and eggs of lake sturgeon. They have been implicated in major die-offs of birds in the Great Lakes. They can harbor the bacterium that causes avian botulism; this is transmitted to the birds that eat round gobies.

Hydrilla: a highly aggressive plant. Hydrilla has clogged drainage canals in the southeast and populations have been reported as close as Massachusetts, Maine, and Suffolk and Orange Counties in New York. A strain of hydrilla was found in the north in the Potomac Basin in the 1980s. Fragments falling from boats, trailers, and live wells can start new populations, which often begin near boat launches. Compared to other aquatic plants, hydrilla grows well in deeper, darker waters and new infestations may establish a foothold there before spreading into shallower waters and out-competing other resident plants.

VHS: viral hemorrhagic septicemia – an often lethal disease of fish that affects numerous species. The presence of VHS in the Great Lakes drainage has led to imposition of significant restrictions on transport of fish between waterbodies. VHS is such a significant disease that new outbreaks have to be reported to the World Health Organization for Animal Health. The disease transmits easily between fish (both individuals and species) and mortality seems to be highest in colder waters (37-54 oF). Some fish may be carriers of the virus and exhibit no external signs. The actual presence of the disease can only be determined by laboratory testing. 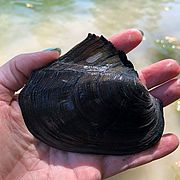 If you’ve paddled, taken a swim, or cast a fishing line in the waterbodies of the Lake Champlain Basin, you’ve likely spent time among one of the most enigmatic groups of aquatic animals in our region: native freshwater mussels. They’re quirky—sporting hatchet-like shells and traveling by a single fleshy foot, yet familiar—related to the invasive zebra mussel and edible bivalves such as littleneck clams and scallops. Read...