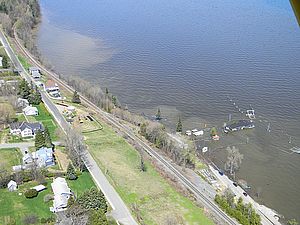 Spring flooding in 2011 at Ferry Landing at Port Kent, NY. Photo by LCBP.

The International Joint Commission (IJC) has been asked to develop a plan of study concerning the record flooding of Lake Champlain and its tributaries, and of the Richelieu River which occurred in Spring 2011. In letters from the Governments of the United States and Canada, IJC is being asked to develop a study proposal which would examine the causes and impacts of flooding, as well as the full range of measures to prepare for, prevent and mitigate such impacts.

It’s not the first time the IJC has examined flooding on Lake Champlain. Back in 1973 an IJC-appointed engineering board debated whether regulating the level of the Richelieu River and Lake Champlain would alleviate shoreline flooding in Quebec. The board agreed that regulation could reduce flood damage, but they disagreed on the environmental affects that would occur. The IJC continued their investigation until January of 1981.

The Lake Champlain Committee, with the support of Dr. Stockton Barnett of SUNY-Plattsburgh and other scientists compiled extensive evidence that artificially manipulating lake levels would have costly economic and environmental impacts. Ultimately the IJC opted against regulating water levels, and instead recommended improved flood forecasting and a variety of non-structural measures to lessen flood damage.