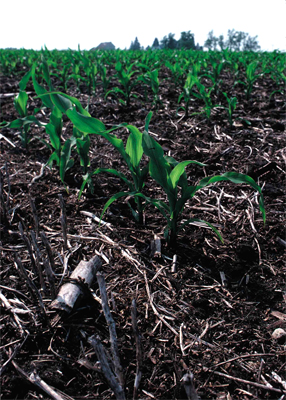 Corn growing in a field that has not been tilled. Photo from NRCS.

Agriculture is a significant source of phosphorus loading to Lake Champlain. Reductions of between 20 and 83% of current loads in targeted watersheds are needed to meet water quality standards. Improving soil health can reduce erosion and phosphorus loss from fields. Cover cropping and no-till farming are two tools that can be used alone or in conjunction to improve soil health, while simultaneously being touted as options to reduce impacts on water.

Cover crops play an important role in no-till systems, though they can also be used on tilled fields. Cover crops are any plants grown not for their economic value, but for some other agronomic purpose. Popular cover crops include grasses like rye and oats or winter legumes like hairy vetch. The most common reason to plant cover crops is to prevent soil erosion, so they are often sown following harvest of the cash crop in late summer or autumn. In addition, cover crops provide a source of green manure, adding organic matter to the soil. They can help alleviate soil compaction. Some species fix nitrogen while others suppress weed growth, though different cover crops are used for each purpose.

Farmers do face costs and risks associated with cover crops. Seeds need to be purchased and sown. Planting involves labor, fuel, and time. Harvest time is among the busiest on the farm and finding opportunities to plant cover crops can be limited. Yet, if farmers wait too long they risk the crop not establishing before winter arrives, leading to loss of their investment. Furthermore, they need to kill the cover crop in the spring before planting their cash crop, which can be a challenge in a region with long winters or wet springs.

No-till farming seeks to minimize the need for agitating the soil prior to or after planting. Typically, agricultural fields are tilled at least once per year. Tillage is turning over and breaking up the soil. Farmers do it to kill weeds and prepare soil for planting. In northern climates with heavy clays, tillage exposes clods to freezing and thawing to loosen the soil. However, tillage also leaves soil exposed to wind and water, increasing erosion. Phosphorus attached to soil particles ends up in the water along with the eroded soil.

No-till farming avoids this method of soil preparation and plants crops directly into the soil. Expensive specialized equipment such as seed drills are usually needed, and farmers must find alternative means of dealing with weeds. No-till is not an all or nothing system. Conservation tillage, or reduced tillage seeks to maximize the benefits of no-till without eschewing tillage entirely.

No-till farming has many benefits for water quality and farmers. There is less soil erosion. Organic matter builds up in the soil, which increases plant nutrients while minimizing the need for fertilizer inputs. The soil is better able to hold water and withstand droughts. Farmers need to make fewer trips over the field reducing fuel and labor costs. Most importantly, well-managed no-till fields can have higher crop yields, though it typically takes a few years to achieve this benefit. According to government surveys, the use of no-tillage farming has grown dramatically over the last decade, accounting for about 35 percent of cropland in the United States in 2009. In our area, adoption has been slower, but is beginning to increase.

No-till agriculture is not without environmental risk however. In order to deal with weed growth farmers typically use, broadcast herbicides like glyphosate in lieu of tilling. Widespread acceptance of no-till in the farming community has coincided with the rise of genetically modified crops resistant to pesticides. Unfortunately, over time, some weeds have also become resistant to the pesticides.

There are ways to reduce pesticide use in no-till systems. Strategic application of pesticides at key moments in the weeds growing cycle can reduce the quantity used and increase their effectiveness. Rotating the type of pesticide used prevents development of resistant weeds. Some cover crops can reduce weed development. Alternatives to pesticides include rolling, mowing, or chopping the cover crop, though the effectiveness of the systems varies with the cover crop. Over time, the weed seedbed diminishes potentially reducing the need for pesticides. Nonetheless, most crop advisors will tell farmers that herbicides are an integral tool when utilizing a no-till system.

Cover cropping and no-till farming are increasing throughout the country as a tool to lessen environmental impacts of farming while sustaining productivity. Farmers, like any other business, need to adapt and change with improvements in technology and knowledge. At the same time we will need to continually monitor any unexpected problems associated with widespread adoption of these systems.