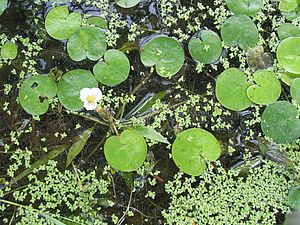 A new population of European frog-bit was discovered during a plant survey in Missisquoi Bay. Researchers from LCC and Arrowwood Environmental had been surveying the plant communities (video) when they came across the population in an isolated embayment near the mouth of Dead Creek on the eastern side of Missisquoi Bay. “It’s a small population with a few scattered individual plants which we removed,” reported LCC Staff Scientist Mike Winslow.

The plant survey is funded by a grant to LCC from the Lake Champlain Basin Program. LCC’s aquatic mapping and removal project is proactive, seeking and eradicating invasive plant populations before they become established. Once a species becomes established, eradication is infeasible in most situations. Our work can prevent species from expanding in the lake. By the end of August, more than half of the Missisquoi Bay plant community had been sampled. Work is expected to continue through September.