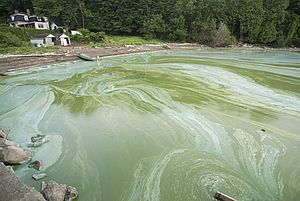 Blue-green algae blooms can produce toxins, but there are no clear drinking water standards for them. Photo by Rob Galbraith.

Last August a blue-green algae bloom over the water treatment intake for Toledo, Ohio caused the city to test for the presence of microcystin, a toxin produced by some blue-green algae species. They found more than 1 part per billion of microcystin in the finished water, with concentrations peaking at about 2.5 parts per billion over the next two days. However, there are no federal standards for how much microcystin is allowable in water. Toledo told their residents not to drink or boil the water coming from their taps. In the wake of what happened in Toledo many questions have been raised about the safety of public water supplies and how drinking water suppliers should handle such situations.

The Washington Post summarized the situation well. “The lack of national standards didn’t cause Toledo’s water crisis. But it made the problem more complicated. It made it harder for people to know whether the water was truly safe for cooking, bathing and drinking.” To make matters worse, there are different procedures for testing water samples. In the Toledo incident, some tests indicated problematic concentrations, while other tests suggested conditions were acceptable.

The only widely accepted guidance on acceptable levels of microcystin in drinking water come from the World Health Organization (WHO). WHO is an arm of the United Nations and is based in Switzerland. In 1998 they suggested that daily intake of drinking water that contained less than one part per billion of microcystin-LR led to no observable adverse health effects. However, their guidance was considered “provisional”. They hoped more data would come forward and noted that there had been no studies on any of the other types of microcystin. Despite WHO’s hopes, sixteen years later no one has provided any clearer guidance.

Microcystins are the most common of a number of different toxins produced by blue-green algae. There are more than 80 different types of microcystin, and LR, the type for which WHO developed guidance, is considered one of the more toxic forms. Microcystins attack the liver, causing disruption of liver cell structure. Hypotheses as to why blue-green algae produce toxins have included protection against predators, protection from excess sunlight, communication between algae cells, and inhibition of competing algae, but no one really knows. WHO suggests the major route of human exposure worldwide is consumption of water. They consider recreational contact a minor exposure route in part because the toxin does not pass through skin readily. Inhalation during showers can also be a minor exposure route but microcystin-LR is very water soluble and not volatile so it is not likely to pass through lungs. Thus, concerns with exposure from both recreation and aerosol drops (as in showers) has to do with the amount of toxin swallowed.

The WHO guidance has been interpreted differently by different authorities. Ohio recommends ‘Do Not Drink’ orders if microcystin concentrations exceed the WHO one part per billion standard. Canada has a limit of 1.5 parts per billion, based on an assumption that the average Canadian weighs 22 pounds less than the average American and drinks a half-liter less water per day. Minnesota adopted a far more restrictive state standard, allowing no more than 0.04 parts per billion microcystin in its drinking water. In our region, New York has no state standard. Vermont's guidance was that if drinking water exceeds the WHO 1 part per billion standard the Department of Environmental Conservation could issue ‘Do Not Drink’ advisories and require increased sampling, while ‘Do Not Use’ orders were issued if microcystin concentrations reached 10 ppb. Vermont's adopted practice expired in January 2015 and was being reconsidered as of this writing.

Some, but not all, water treatment practices can mitigate microcystins. In general, treatments that remove cells intact work better than treatments that physically break apart the algae and release toxins into the water. That is part of the reason boiling does not work as a treatment method. Chlorination can destroy toxins under some conditions. Activated carbon filtration seems to be one of the more effective treatments. Anyone who draws water from the lake should not drink, cook, wash dishes or shower with the water if a bloom occurs near their intake.

EPA has stated that they plan to issue drinking water health advisories for blue-green algae toxins by May 2015. To develop the standards they have begun a contractor-led peer review of existing health advisories and literature about algae toxins. They may not find much more than what the 1998 WHO work was based upon, but simply codifying procedures across the country will help eliminate some of the confusion that beset Toledo. Unfortunately, a May release date allows only limited time for state agencies and water suppliers to prepare for the summer algae bloom season. During EPA Administrator Gina McCarthy’s fall visit to Vermont LCC urged her to accelerate the process.