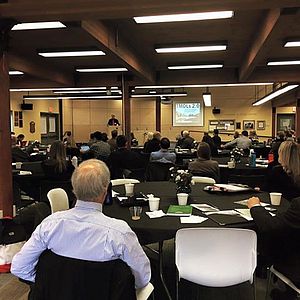 On October 23, the Vermont Law School hosted a symposium titled "TMDLs 2.0: Charting a Course for Clean Water." During the symposium, keynote speakers and panelists discussed cutting-edge litigation, key court decisions, and the impact of Total Maximum Daily Load (TMDL) regulations on water quality. TMDL refers to the maximum amount of a pollutant that a body of water can hold and still meet water quality standards. They are a part of the Clean Water Act, but for most of the act’s history they were not vigorously applied to water bodies contaminated by non-point sources of pollution such as agricultural runoff. Lake Champlain has a TMDL that is currently being reviewed an updated by the Environmental Protection Agency.

At the symposium, nationally recognized legal scholars Oliver Houck of Tulane and Dave Owen of University of California Hastings were joined by state and federal officials, practitioners and environmental advocates to examine the latest developments in Clean Water Act regulations.

The morning keynote address by Dave Owen was entitled “After the TMDLs”. Professor Owen noted that the average TMDL in California costs $1.5 million to prepare, a significant sum. Investing in development of TMDLs represents a choice about how to spend public resources to best improve water quality. Public dollars spent on TMDL development are no longer available for enforcement, implementation, or education and outreach. Court cases have left it up to states to determine the degree to which they implement controls on non-point sources of pollution. Owens noted there are only three states with statutory calls for such controls– California, Vermont, and Virginia, and many states forbid mandatory control of non-point sources. Owens cautioned lawyers to think long and hard before filing a case about TMDLs. Cases may be winnable, but not constructive.

The afternoon keynote by Oliver Houck was entitled “Searching for the missing, a Clean Water Act story.” Houck identified two key provisions that led to the early successes of the clean water act. First, the act relied upon a permit system, based on numbers, developed by engineers not scientists. Thus, technology drove improvements in cleaning wastewater, rather than debates about the impacts on the receiving waters. Second, the act could be enforced by lawsuits from citizens, rather than relying only on the state or federal government for enforcement actions.

Progress in cleaning the nation’s waters has slowed. Houck identified the rise of benefit-cost analyses as a policy tool as one reason. The Clean Water Act was aspirational, calling for zero discharge of pollution. As a result of the rise in benefit-cost analyses, every attempt at improving water quality tries to arrive at a least cost solution that achieves “reasonable” pollution levels. An additional impediment to progress is that today more citizen suits are filed by industry and trade groups seeking to weaken regulations than by environmental groups seeking to strengthen regulations.

Houck identified money as a big reason why the Clean Water Act has not succeeded at managing non-point pollution sources. The act provides no financial incentives for complying with its provisions. The act offered a ‘command and control’ approach of mandates rather than a creating a ‘pay to pollute’ system that would have led to financial incentives to reduce pollution. The ‘pay to pollute’ approach successfully led to reductions in air pollution under the Clean Air Act. Houck suggested that a non-point source pollution tax should be levied against farms and municipalities that fail to implement and follow best management practices.

In addition to the keynote addresses the symposium featured four panel discussions. Three focused on application of TMDLs to regional issues: the Chesapeake Bay, the Gulf of Mexico, and Lake Champlain. The fourth focused on two court cases. One is currently being litigated in Iowa court and it seeks to identify agricultural tile drains as a point source of pollution. The second led to a determination earlier this year in Yakima, Washington that dairy manure can be treated as a waste under the Resource Conservation and Recovery Act.

The Lake Champlain TMDL is a defining document in the management of our lake. Recent updates to the TMDL have been a driving force in strengthening water quality policy in Vermont. Broadening our understanding of how these plans have been used in other states and regions can only help in our application of them here.