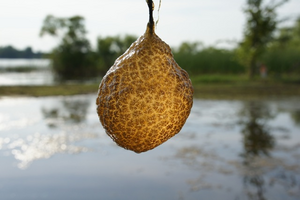 This strange looking blob is a Bryozoan colony. Photo by Lisa Miller.

Brown jelly-like blobs have been reported from various places around Lake Champlain this summer. The patterning on the surface of the blobs makes them resemble brains or diseased tree branches. These are actually colonies of sessile invertebrate animals called bryozoans. While the blobs may range from golf ball to melon-sized, each individual in the colony is microscopic. Most bryozoan species live in marine environments, but 50 species are known from freshwater including 21 from North America. The species most commonly observed in Lake Champlain is probably Pectinatella magnifica. Bryozoans tend to grow on wood or other vegetation in areas where the water is quiet. They do not tolerate polluted conditions and require fairly high oxygen levels in the water. Occasional summer outbreaks have been recorded on other waterbodies, but it is unclear why they happen.