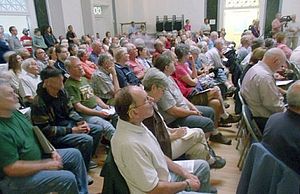 A standing room only crowd calls for a ban on DOT tankers. Photo by Brian Mann of North Country Public Radio.

More than 130 concerned residents attended an LCC public forum to discuss the risks of crude oil train traffic through the Adirondack Park and Champlain Valley last week, with many saying they would urge New York state officials to fully assess the risks to communities and the environment, and urge federal regulators to ban the older, leak-prone rail tanker cars involved in recent spills, fires and explosions. The event was hosted by the Lake Champlain Committee, Adirondack Council, Adirondack Mountain Club, and the Center for Biological Diversity.

Currently, more than three million gallons per day of Bakken crude oil is transported through the region on rail lines that had rarely carried crude oil or hazardous materials before.

The NYS Department of Environmental Conservation (NYS DEC) will be accepting comments through September 30 on its environmental assessment of the plan by Global Partners to expand its oil-transfer facilities at the Port of Albany. Federal officials are currently updating their risk assessments for the rail tanker car traffic.

“If the Global Partners' expansion is approved, it could lead to a major increase in oil train traffic through the Champlain Valley,” said Lori Fisher, Executive Director of the Lake Champlain Committee. “The new traffic would be carrying tar sands oil from Canada, in addition to the Bakken crude oil already coming from North Dakota, and put our communities and waterways at even greater risk.”

“Tar sands oil is not as explosive as Bakken crude, but it is very heavy and sinks in water so it is very difficult to clean up once it is spilled,” said Adirondack Mountain Club Executive Director Neil Woodworth. “If it gets into Lake Champlain, it is likely we will never get it out again.”

“We know the Adirondack Park is home to some of New York’s rarest and most sensitive wildlife, fish and plant life; and, we know trains derail,” said Mollie Matteson, a biologist at the Center for Biological Diversity. “Immediate action is needed to protect this fragile, irreplaceable environment.”

The organizations said NYS DEC should take into consideration potential for damage to Lake Champlain, the Adirondack Park, the communities through which the tracks pass and local farms when assessing the environmental risks of expanded oil traffic.

The groups also urged those who care about the Adirondack Park and Lake Champlain to tell their Congressional representatives to seek a ban on the model DOT-111 rail cars that have been blamed for most of the recent spills and fires around the country.

The risks of Bakken crude oil rail shipments have been highlighted by a series of recent derailments in the U.S. and Canada resulting in water and soil contamination, deadly explosions and raging fires. A 2013 derailment involving nearly 80 tankers in Lac-Megantic, Quebec, killed 47 people and devastated the town. A derailment in May in Lynchburg, Va., set the James River on fire.

Federal officials have said they would require the replacement of the leak-prone rail tanker cars (model DOT-111) involved in recent spills, fires and explosions. However, it will take years to carry out the current plan.

On average, 3.4 million gallons of explosive crude oil per day are shipped through the Champlain Valley on trains coming from the oil fields of North Dakota, through Canada, to Albany. Between five and nine trains per week use the Canadian Pacific Railroad line between Montreal and the Port of Albany on the Hudson River. Each train can haul up to 100 oil tankers. Each tank car carries about 34,000 gallons of oil.

Bakken crude is light and contains large amounts of volatile chemicals, making it highly flammable. Tar sands oil is less explosive, but much heavier. It sinks rather than floating on water, making it impossible to remove via conventional boom-and-suction methods.

Every crude oil spill causes lasting environmental damage, the organizations noted, pointing to continuing problems in Alaska and the Gulf of Mexico from the Exxon Valdez and British Petroleum Deepwater Horizon disasters. Closer to home, attempts to clean up oil spills on the St. Lawrence River (1976) and at a long-closed steel mill in southern St. Lawrence County continue to cost taxpayers millions of dollars, decades after they occurred.

The Canadian Pacific Railroad tracks run alongside Lake Champlain for more than 130 miles, including 100 miles inside the Adirondack Park. The tracks also cross the Saranac, Ausable and Bouquet rivers. For many miles, the tracks are just a few feet from the water’s edge.

Lake Champlain is ecologically rich, the drinking water source for nearly 200,000 Champlain Valley residents, and a key driver for the regional economy. The tracks also run through the center of more than a dozen small communities and the City of Plattsburgh, within a short distance of schools, homes, businesses, farmlands, tourist accommodations, campgrounds, beaches and municipal offices.