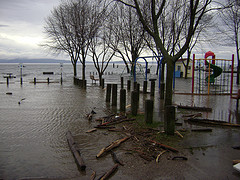 Lake Champlain was above flood stage for two months this spring. The record flooding that occurred in New York, Vermont and Quebec has led to calls for the governments to ‘do something’. Vermont Governor Peter Shumlin and Quebec Premier Jean Charest have asked President Barack Obama and Canadian Prime Minister Stephen Harper to charge the International Joint Commission (IJC) with researching ways to reduce flooding near Lake Champlain and the Richelieu River. The IJC is responsible for overseeing international boundary waters.

The Lake Champlain Basin Program has also agreed to coordinate a conference with federal, state and provincial officials and scientists to discuss how to prevent future flooding. Senator Patrick Leahy helped secure funding for the conference through the Great Lakes Fishery Commission.

LCC Executive Director Lori Fisher praised the effort noting that “we need to be prepared for wetter conditions and heavier and more frequent storms that climate change has imposed.”