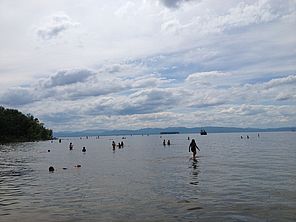 On Friday June 17, EPA released a final Total Maximum Daily Load (TMDL) for Lake Champlain. The TMDL sets a pollution budget, defining how much of a given pollutant can enter a water body with water quality standards still being met. It took 5 1/2 years to complete, and is the culmination of hard work by dozens of scientists, engineers, computer modelers and others working for EPA and the state of Vermont. The effort was thorough, and required by law, but it is not a roadmap for cleaning Lake Champlain. The TMDL is only a budget for how much the lake can absorb and meet water quality standards.

The real work of implementing the TMDL comes at the state level and began with the passage of Act 64, the Vermont Clean Water Act, in 2015. Act 64 calls for a number of increased regulations to protect water. It requires VT DEC to establish a new permit system for municipal roads. It calls for changing the name of Acceptable Agricultural Practices to Required Agricultural Practices (RAPs) and strengthening them. Farmers who are shown to be out of compliance with RAPs will no longer be eligible for reduced tax rates through the Current Use program. It creates a small farm certification program, requires new training programs for farm operators and custom manure applicators, and streamlines agricultural enforcement operations. The legislation increases the involvement of Regional Planning Commissions in basin planning and requires revision to forestry Acceptable Management Practices.

These new rules and regulations are in various phases of development. For instance, the Agency of Agriculture filed the proposed RAP rule in May and is currently reviewing formal public comment. It will be the strength of these rules and the diligence with which they are enforced that will determine how successful Act 64 will be.

The TMDL was the club that forced state policy changes. If the state had not passed such legislation and shown a commitment to implementing it, then EPA could have required more draconian measures. With the finalization of the TMDL, EPA has signified its satisfaction with the state’s progress.

The first assumption is that if we lower the phosphorus levels coming into the lake it will lead to a reduction in algae. For decades phosphorus has been considered algae’s limiting resource, the substance in least supply relative to need. Unfortunately, algae is not one thing. Rather there are many different species with different limiting resources. While phosphorus controls some species, others are controlled by nitrogen. Some species even become more competitive as phosphorus levels decrease. We have seen a worldwide increase in algae blooms as our climate warms, generating more and more focus on the role of temperature in stimulating algae blooms.

The second assumption is that controlling how we manage phosphorus on the land will affect phosphorus levels in the lake. Early success at reducing phosphorus levels by eliminating the amount discharged from wastewater treatment facilities caused hope that this strategy would succeed.

The example of St. Albans Bay should temper our expectations. In the 1980s, overall annual phosphorus loading to St. Albans Bay was reduced by 30%, the lowest point in 70 years at that time. The reductions came almost exclusively from upgrades to the wastewater system which resulted in a 90% reduction from that source, but efforts to curb farm pollution were also very successful. The St. Albans Bay Rural Clean Water Program targeted investments to reduce phosphorus run-off from farms. Sixty percent of farms in the watershed implemented best management practices affecting 74% of the critical acres and 80% of the total manure load. Regulators confidently predicted that in a short period of time the bay would recover and meet water quality standards.

But we’re still waiting. Between 1979 and 2009 there was no detectable change in the in-lake phosphorus levels for St. Albans Bay. The agricultural best management practices implemented in the 1980s did not lead to actual reductions in loading. The wastewater upgrades did lead to load reductions, but there is enough phosphorus stored in the sediment of St. Albans Bay to offset any gains. While the investments called for in a new TMDL will have environmental benefits, we have no reason to expect they will be any more effective at prompting a swift recovery in the bay.

Changes in Lake Champlain will not happen for a long time. In commenting on the TMDL, researchers from the University of Vermont (UVM) noted, “it should also be made abundantly clear to the communities that are implementing BMPs [best management practices] … that bay recovery will not be swift in either [Missisquoi or St. Albans Bay] - best case scenarios (that do not accurately capture climate change dynamics) suggest that even with aggressive BMP implementation, recovery of the Missisquoi system and achieving EPA target water column [phosphorus] concentrations will take decades … climate change will only serve to exacerbate this problem.”

The TMDL is a budget. It is up to the state and all of us to take steps toward living within that budget. With our current numbers of people, roads, cars, and cows, not to mention the decades of abuse already done to the landscape, we are far away from meeting the budget.