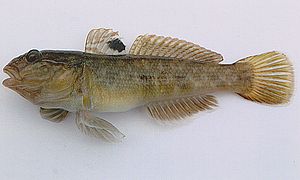 Invasive fish like the round goby are making their way closer to Lake Champlain. Photo by Wikipedia.org.

The spiny waterflea arrived in Lake Champlain last summer, becoming the 50th invasive species in the lake. We know it won’t be the last. Recently, a group of environmental professionals discussed what species posed the greatest risk of being the next arrival. Three likely candidates were round goby, hydrilla, and VHS.

Round goby are fish native to the Caspian and Black Sea regions. They were introduced to the Great Lakes probably from a ship's discharged ballast water, and first found in North America in 1990 in the St. Clair River. Since then they have spread into the Erie Canal system as far west as Syracuse and Oneida Lake. They are also known to reside in the St. Lawrence and Richelieu Rivers.

Gobies are bottom-dwelling fish that perch on rocks and substrate. They can grow up to 10 inches long and have large heads, soft bodies and dorsal fins that lack spines. Often confused with sculpins, the round goby is distinguished by its fused pelvic (bottom) fin which forms a suction disk that allows them to anchor to the bottom. No fish native to North America has this feature. This trait and their ability to feed in darkness helps them out-compete native fish for food.

Round gobies are predators of many native fish such as darters, sculpins, and logperch. Populations of some of these species have seen substantial declines in the St. Clair River. Round gobies also eat eggs and fry of lake trout and eggs of lake sturgeon and steal bait off of fishhooks. They have also been implicated in major die-offs of birds in the Great Lakes as they can harbor the bacterium that causes avian botulism; this is transmitted to birds that eat round gobies.

Hydrilla is a highly aggressive plant that has clogged drainage canals throughout the southeast. Populations have been reported as close as Cayuga Lake in western New York. The Cayuga Lake population was found in 2011 at the lake inlet, and there is substantial risk of spread from there. The largest inland marina in New York at Allan H. Treman State Marine Park sits near the inlet.

Compared to other aquatic plants, hydrilla grows well in deeper, darker waters and new infestations may establish a foothold there before spreading into shallower waters and out-competing other resident plants. The populations in northern states produce only male flowers, so reproduction is asexual. Fragments falling from boats, trailers, and live wells start new populations, which often begin near boat launches. Buds and tubers help the plant overwinter, and may also provide a means of spread. The strain of the plant found in the north is believed to have originated in Korea.

VHS stands for viral hemorrhagic septicemia. It is an often lethal fish disease that affects numerous species. VHS is such a significant disease that new outbreaks have to be reported to the World Health Organization for Animal Health. The disease transmits easily between fish (both individuals and species) and mortality seems to be highest in colder waters (37-54 degrees F). Some fish may be carriers of the virus and exhibit no external signs. The actual presence of the disease can only be determined by laboratory testing.

There are many different strains of VHS. The one in the Great Lakes is labelled IV-b and it has been in the region since at least 2003. This variant has killed lake trout, steelhead trout, chinook salmon, yellow perch, gobies, emerald shiners, muskies, whitefish, and walleye. The Great Lakes variant has been observed in Conesus Lake and Skaneateles Lake in the New York Finger Lakes chain, and in the Seneca-Cayuga Canal.

The presence of VHS in the Great Lakes drainage has led to imposition of significant restrictions on transport of fish between waterbodies. Both New York and Vermont have imposed restrictions on moving baitfish from one water body to another. The disease can spread from fish to fish, in contaminated water, or through contaminated eggs. Some fish may be carriers of the virus and exhibit no external signs. The actual presence of the disease can only be determined by laboratory testing.

Any invasive species has the potential to dramatically impact its new environment. These three– round goby, hydrilla, and VHS – are candidates for having the greatest potential to wreak havoc on Lake Champlain. They are all reasonably close by and have demonstratively impacted those waterbodies they’ve already invaded.

Steps must be taken to limit invasive species spread. On the personal level, all boaters need to clean, drain, and dry their boats whenever they move them from one waterbody to another. That includes when moving from Lake Champlain to other lakes as Champlain is a regional source of invasives. Anglers need to take care that bait and even bait water does not transfer between waterbodies. And we need to continue to pressure the New York State Canal Corp to take steps to prevent movement of species through canals.