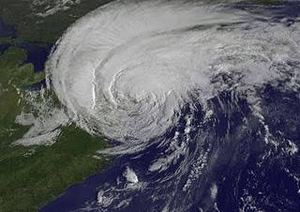 Between 7:00 AM and 4:00 PM on Sunday August 28th Lake Champlain rose approximately three feet according to the gauge in Whitehall, NY at the southern end of the lake. Over the same time span the gauge at Rouses Point at the northern end of the lake suggested lake level had dropped by over a foot. The winds of Tropical Storm Irene, with sustained winds over 35 knots (40 mph) and gusts up to 45 knots (52 mph), had pushed the surface water of the lake south where it piled up in Whitehall.

Since surface water is warmer than the water of the depths, the push of so much water also created some temperature anomalies.  At the north end of the lake, cold water from the depths welled up to replace the displaced warm water. Surface water temperature at the Colchester Reef dropped from 710 F before the storm to 540 F at 4:00 PM.

Wind-driven piling of water at one end of the lake, known as a seiche, is common, but the degree to which it occurred during Irene was quite dramatic. To learn more about the seiche in Lake Champlain check out the Lake Look archives on LCC’s website.