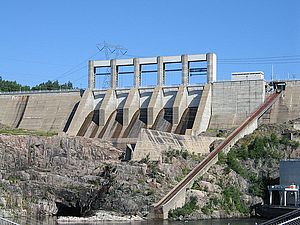 TDI’s proposed power line would transmit electricity from hydro-dams like this one in Northern Quebec to New York City. Photo by Wikipedia.

The proposal to install a 1,000-megawatt transmission line on the bottom of Lake Champlain to transport hydro and wind power from Canada to the New York City market continues to move forward. At the end of February the project proponent, Transmission Developers Inc. (TDI), said it had reached agreements with numerous state agencies, local governments and environmental groups on many aspects of the project. The proposed route has been altered to avoid impacting sensitive wetlands in the South Lake area as requested by LCC. Instead, the line will leave Lake Champlain in Dresden, New York and continue overland to Whitehall before reentering the water.

LCC also advocated that TDI create an environmental remediation fund. As  part of the agreement, TDI will establish a $117 million fund to pay for projects in Lake Champlain, the Hudson Estuary, and the Harlem and East rivers, as well as their tributaries, over the next 35 years. The purpose of the fund is to protect, restore and improve aquatic habitats and fisheries for these water bodies. Money in the fund will come from transmission line operations.

Upstate unions and power plant owners have raised objections. They worry that the transmission line will make it more difficult for upstate producers to sell their energy in the downstate market. They want the transmission line connected to the rest of the state’s energy grid so that they can also feed in energy.