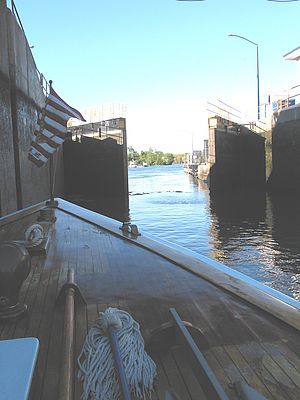 Lock 12 discharges water and any invasive species that might be in it into Lake Champlain. Photo by Lori Fisher.

Competing opinions from too many lawyers and an excess of backside covering from political appointees have prevented any forward movement to address the risk of invasive species entering Lake Champlain through the Champlain Canal. Money is available for the work. The right people are in place to at least provide a study of the problem. The need is there. Yet, the project is caught in a bureaucratic web with fingers pointing in all different directions.

The Champlain Canal is the single largest vector for invasive species to enter Lake Champlain. Of the exotic species whose origin to the lake is known, over 60 percent entered via canals. Zebra mussels, Eurasian watermilfoil, water chestnut, and white perch all came through the Champlain Canal. Round goby and hydrilla are currently in the canal system, making their way towards Lake Champlain.

The importance of the canal as a source of invasive species for Lake Champlain and the idea of an invasive species barrier in the canal were first identified in 2005. That year a report was released by Lake Champlain Sea Grant titled Feasibility of Champlain Canal Aquatic Nuisance Species Barrier Options.  A public meeting followed in 2008 at which LCC and many other organizations urged the New York State Canal Corps to focus their efforts on developing an effective barrier option.

The U.S. Army Corps of Engineers was identified as the appropriate government unit to undertake a barrier feasibility study. They had authority and expertise to work on invasive species issues affecting Lake Champlain. Senator Leahy managed to secure $200,000 to provide matching funds for the project through the Lake Champlain Basin Program. The initial read from the Canal Corps was that the Army Corps could simply proceed with the work since there was no money required from the Canal Corps budget.

Then the first set of conflicting legal opinions emerged. Lawyers at the Canal Corps determined that, even though they weren’t contributing money, they were providing services of value in the execution of the study and therefore a signed agreement was necessary between the Canal Corps and the Army Corps. Negotiations on that agreement began, but with no sense of urgency.

In 2012, a sense of urgency emerged when the invasive spiny waterflea was found in the Champlain Canal. Media attention followed and calls to close the canal intensified. It still took another year for the Army Corps and the Canal Corps to figure out what they needed to study before they could erect any barriers. At that time, LCC faulted the Army Corps and their notoriously glacial pace for holding up the work.

Blame shifted at the end of 2014. By the autumn of 2014, the Army Corps and Canal Corps had agreed on the details of a project but still no work had been done. Then, extensive staffing transitions at the New York State Thruway Authority (the parent group for the Canal Corps) led to reconsideration of previously agreed to projects, including the Champlain Canal invasive species barrier. The new appointees were not comfortable moving forward on the projects approved by the people they were replacing. Another layer of review was needed; another set of signatures from a different group of higher-ups.

It took some time for that review to occur, but the details got hammered out and the Army Corps was ready to begin work in mid-2015. The Canal Corps felt they needed a few more signatures, just to be safe, but the Army Corps believed the agreement was in hand. They just had to cash that check and begin the study. Of course it wouldn’t be that simple.

Yet another set of lawyers got involved, now from the Attorney General’s office. They identified some language typical of Army Corps agreements that seemed to be lacking in the agreement with the Canal Corps. Inclusion of the language triggered a new review by the Army Corps which, based on past experience, would take months.

So, here we are, more than a decade after the problem and a potential solution were first identified, and we haven’t even begun the study that might lead to implementation of the project! Invasive aquatic species cause $500 million dollars in economic losses each year in New York alone.  Once they become established in a system they are impossible to eradicate. It is shocking how difficult it has been to spend money appropriated by the federal government for this project to prevent invasions. The case of the Champlain Canal barrier study provides enough fodder for an entire course in how government should not function. Meanwhile the round goby and hydrilla continue to inch their way closer to Lake Champlain.