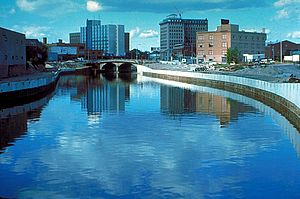 Don’t drink the water... Seriously. Image of Flint from Wikipedia.

High lead levels in the drinking water in Flint, Michigan have led to a federal state of emergency, mobilization of the National Guard, the resignation of the state’s highest environmental officer and public apologies from the governor. Lead levels are more than five times higher than what is considered levels of concern.

The lead leached from aging water pipes after the city changed its drinking water source from Lake Huron to the Flint River in April of 2014. Flint is a city in financial disarray and governed by an emergency manager appointed by the state. One step in trying to resolve their financial crisis was to switch water suppliers. They had relied on Lake Huron water supplied by the Detroit Water and Sewage Department.  The move was meant to be temporary as a new pipeline to Lake Huron was constructed, but the transition was not well managed.

All older cities have lead pipes or lead solder in their buildings. To prevent the lead from entering drinking water, suppliers need to put corrosion inhibiters into the water before it leaves treatment plants. When Flint changed water sources they did not install new corrosion prevention practices. Differences in pH and corrosiveness of the Flint River compared to Lake Huron caused lead to leach from pipes leading to the current crisis.

Lead is most dangerous for young children. USA Today estimated over 8,000 children have been exposed to dangerous lead levels during the Flint crisis. Lead exposure can affect nearly every system in a person’s body, and even low levels of lead in a child’s blood have been found to affect IQ, attention spans and performance in school, according to the Centers for Disease Control and Prevention (CDC). The CDC also says that the effects of lead exposure cannot be corrected.

The lesson from Flint is that we cannot take our drinking water for granted. We have numerous state and federal laws to protect our water quality, but the laws are insufficient to protect us when officials seek cheap shortcuts. Drinking water safety depends on crucial attention to detail from water suppliers and regulators.