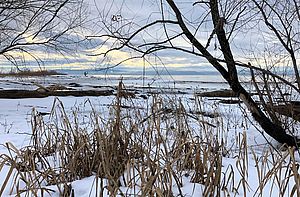 Lakeshore and grassland are like yin and yang: seemingly opposite forces that are complimentary. The lakeshore provides water disturbance to the grass and the grassland provides shoreline stabilization to the lake—both processes shape this natural system. When we think of grasslands, images of megafauna grazing on vast expanses of grass in the Midwestern United States or Africa come to mind. In the Lake Champlain Basin, the scene differs: large bodies—chunks of ice—slide and scrape across comparatively small areas of land. The ice separates plants from the ground, similar to how a scythe is used to mow across a hay field.

Wintertime is often perceived as a period of inactivity; for a Lakeshore Grassland, the opposite is true. On the edge of Lake Champlain, winds whip, waves crash, and ice crunches. Water within this system plays multiple roles, and the annual movement of ice is one of them. Ice scouring—blocks of floating ice that move over exposed shorelines—is an integral form of natural disturbance in winter and spring that maintains the open space of a Lakeshore Grassland. Ice, waves, and floods redeposit materials like cobbles, gravel, sand, silt, and clay onto the lakeshore. This movement creates a dynamic and shifting substrate for plants to grow on. The deposition of sediments determines the composition of plant species. Water disturbances enable this type of natural place to exist. In some cases, groundwater seeps—areas where water emerges from below soil or bedrock—introduce water to sites, too.

Seasonal changes can determine the width of a Lakeshore Grassland; they are usually 25 to 50 feet wide and can span to a couple of thousand feet long, based on fluctuations in lake level. If you were to walk along this shoreline system, you’d likely observe a 50 percent cover of cobble and shale and a 50 percent cover of vegetation: one foot on shades of gray rocks and the other foot on hues of green plants. The vegetation grows in the mineral soil and organic matter that collects between the spaces of cobble (larger than a pebble and smaller than a boulder) and shale.

A Lakeshore Grassland is a rare natural community type in the Lake Champlain Basin. Rare is defined as, “occurring at a small number of sites or occupying a small total area in the state,” by the Vermont Natural Heritage Inventory of Vermont Fish and Wildlife Department. A natural community (Vermont’s term) or ecological community (New York’s term) is an interacting group of plants and animals that share a common environment. The outdoor world of organisms, physical environments, and natural processes is complex and communities are used to breakdown the complexity into coherent parts. A Lakeshore Grassland is one of 97 types of natural communities that occur in Vermont. The exploration of this grassland can extend to areas with a similar climate and physical setting, like New York and southern Québec. Under the New York classification system, the parallel association is an Inland Calcareous Lake Shore; it is one of 260 types of ecological communities—New York is over five times larger than Vermont and includes marine and estuarine systems—that occur in the state.

The Lakeshore Grassland network is a wetland: a vegetated ecosystem with abundant water. It is an intermediate between aquatic open water ecosystems, like Lake Champlain, and drier upland ecosystems, like the Lake Shale or Cobble Beach natural community. The Lake Shale or Cobble Beach community is also influenced by ice scouring, wave action, and flooding, but the substrate is often hot and dry in the summer, whereas the substrate is moister in a Lakeshore Grassland. The two communities often occur side by side and overlap in species composition.

A distinct group of plants help to define a Lakeshore Grassland. While shrubs and saplings—woody vegetation—are sparse in this network, they include common native shrubs like red-osier dogwood and a couple of willow species; seedlings and saplings of native cottonwood, green ash, and silver maple trees are also typical of this community. Common native herbs—non-woody plants—include freshwater cordgrass (also referred to as prairie cordgrass), greenish sedge, and silverweed. At a height between three and eight feet, freshwater cordgrass is one of the tallest grasses in North America. This species is tenacious: it has vigorous rhizomes—an underground stem—and a stiff main stem. The above and below ground stems create a dense and arching growth profile and allow it to withstand ice scour.

Flowering rush, purple loosestrife, and reed canary grass are all non-native plants that can invade Lakeshore Grasslands. They threaten the ecological integrity of this network by displacing native vegetation, reducing biodiversity, degrading wildlife habitat, and altering the availability of nutrients, water, and light.

Threats to Lakeshore Grasslands include shoreline development, loss of forested buffers—vegetated areas that border rivers, lakes, and wetlands—and beach raking. In recognition of their ecological value and rarity, examples of this natural system are protected on conserved land.

Natural communities are intriguing year-round. The Lakeshore Grassland’s palette is subdued in winter. Golden hues of decomposing grass and sedge clumps linger through the snow, red-osier dogwood provides pops of color, and the white-blue of water, snow, and ice tie this tranquil landscape together. In Chittenden County, a Lakeshore Grassland is accessible off of the Island Line Rail Trail at Delta Park in Colchester, Vermont. The natural area is located immediately north of the mouth of the Winooski river and is owned by the Winooski Valley Park District (WVPD). In New York, you can find this system at the Ausable Point Campground in the town of Peru. Visit the WVPD website for background information on and access points to Delta Park and the New York State Department of Environmental Conservation (NYS DEC) website for details on the Ausable Point Campground.

Learn more about this group of plants and animals via the book Wetland, Woodland, Wildland: A Guide to the Natural Communities of Vermont or through the publication Ecological Communities of New York State.

The dynamic movement of water in all seasons impacts the assemblage of plants and animals across landscapes. However, for Lakeshore Grasslands, ice scouring in winter plays a lead role in shaping the community.