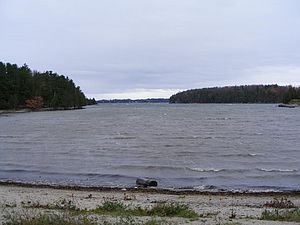 Water blowing into Kingsland Bay as the winds pick up. Photo by Mike Winslow.

Strong winds out of the north during Hurricane Sandy led to a decrease in lake level at Rouses Point and an increase at Whitehall as waters were pushed south. The difference amounted to about four inches. Following the storm, the lake leveled out again. The effect was less extreme than what was seen during Tropical Storm Irene when nearly a foot of water was displaced.

Lake levels remain low. On October 24 Lake Champlain climbed above 95.0 feet for the first time since July 21. October is typically the month when lake levels are lowest, averaging only 95.26 feet, so we are still well below average. While low levels this summer never quite reached the record lows of 1941 and 1949, it has been many years since so much lakeshore land was exposed. The lowest lake level for this year was 94.0 feet on September 5th, the lowest since January of 2002.