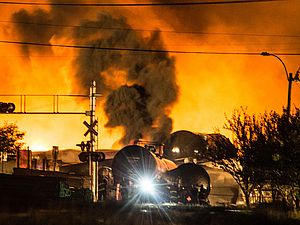 Rail transport of explosive Bakken crude oil through the North Country has increased dramatically due to tremendous growth in outputs from Canada and the Bakken oil fields of North Dakota. Rail incidents in Quebec, Alberta, Alabama, North Dakota, New Brunswick, and Virginia have led to fires and explosions. Last year's derailment at Lac-Mégantic, Quebec killed 47 people and devastated the community. Don’t let the next accident happen in our backyards.

You can influence important upcoming decisions on this issue!

Please file comments by 11/30/14 with the New York Department of Environmental Conservation (NY DEC). Further information is below about where to send your comments along with our contact information should you want help in crafting your message.

Prevent tar sands from being transported through our communities

Global Partners, an oil shipping company, has submitted plans for an oil heating facility in Albany that would allow shipment of Canadian tar sands oil. Tar sands would travel by train to Albany, and down the Hudson river by barge to East Coast refineries. Tar sands oil is viscous and dense; it sinks to the bottom when spilled in water. Most clean-up efforts of heavy crude recover 10-20 percent, at best. The rest stays in the environment. The NY DEC is currently accepting comments on the plan for a heating facility for heavy crude at Albany. Tell NY DEC that any expansion at Global Partners’ terminal should undergo a full environmental impact review that includes analysis of impacts of oil transport via rail throughout the region including along Lake Champlain.

Please contact LCC if you'd like to see the comments we filed with New York DEC, need help crafting your message, or want to discuss this issue further.