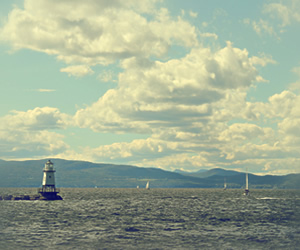 EPA has released a draft pollution budget for the lake. Photo from EPA.

Last week EPA held a series of hearings in the Lake Champlain Basin to introduce their proposed phosphorus pollution budget (called a total maximum daily load or TMDL). The full presentation is available online. The budget calls for a 36% reduction in current phosphorus loading to Lake Champlain with watershed specific reductions ranging from a low of 12% in the Isle La Motte section of the lake to a high of 67% in Missisquoi Bay. EPA says the reductions are necessary for the lake to achieve water quality standards for phosphorus. EPA began development of the new budget in 2011 after rescinding approval for the prior 2002 pollution budget in response to a law suit.

The new TMDL allows a 55% increase in phosphorus loading compared to the earlier version, all of which has been allocated to Vermont. The increase in the new TMDL comes about because it is based on wetter years. When more water falls in the basin the volume moving through the lake increases and more phosphorus can come in while maintaining a similar concentration. Only the Vermont portion of the TMDL was challenged in court, so New York loading targets remain unchanged at this time.

The budget apportions allowed phosphorus loading between federally permitted sources and non-permitted sources. Permitted sources include wastewater treatment facilities, larger developed communities, and concentrated animal feeding operations. Collectively these are referred to as a “wasteload allocation”. Non-permitted sources include most agricultural activities, forestry practices, and development projects requiring only local or state permits. Collectively these are referred to as a “load” allocation. The budget also includes a mandated margin of safety, which EPA has chosen to address by adding 5% to the overall allocation for each lake segment.

EPA required reductions in the wasteload allocation vary between lake segments. Twenty-eight of Vermont’s 41 large wastewater treatment facilities in the Lake Champlain Basin would need to reduce their permitted phosphorus concentration from the 0.8 mg/L to 0.2 mg/L. Three medium sized facilities would need to meet the 0.8 milligrams per liter (mg/L) standard. Reductions are targeted to lake segments with the greatest percent contribution from wastewater facilities and those segments where it is currently unclear whether the overall budget can be met. These steps reduce the permitted load from wastewater treatment facilities by 44% over the 2002 TMDL. EPA has also set target reductions of phosphorus loading from developed lands of between 9% for the Isle La Motte section to 26% for Mallets Bay. To meet these targets Vermont proposes modifying existing permit programs to emphasize phosphorus reduction and creating new permit programs for state and local roads. Additionally, either EPA or Vermont may extend jurisdiction to smaller projects or municipalities shifting them from the load allocation to the wasteload allocation.

EPA has called for reductions in the load allocation ranging from no change in Burlington Bay to 75% reduction for Missisquoi Bay. The Burlington Bay watershed is highly developed so all their budget is on the wasteload allocation side, while Missisquoi Bay has little wasteload and efforts to meet water quality standards there must focus on non-permitted sources. Vermont has proposed increasing regulatory requirements, enforcement capacity, certification programs, and education and outreach for farms to meet the load allocation reductions. They also plan to revise accepted forestry practices and take steps to better manage rivers, wetlands and shorelands to reduce loading from these sources.

There are three lake segments that need to reduce their load allocation by 50% or more: South Lake A and South Lake B (collectively the area between Whitehall and the Crown Point Bridge) and Missisquoi Bay. It is not clear given EPA’s modeling that such drastic reductions are possible. In these watersheds additional measures have been proposed including targeted farm inspections, increased funding for best management practices, and some demonstration projects.

Vermont has to convince EPA that they can make progress in meeting their load allocation. This will require a commitment to funding the described programs and progress on developing new permits. Such steps will be an important topic during the upcoming Vermont Legislative session. To ensure programs stay on track, EPA has set up an accountability framework. They are in the process of identifying milestones against which policy progress can be evaluated. If Vermont fails to meet these milestones EPA can require more reductions in the wasteload, a costly proposition that Vermont would prefer to avoid. A determination of progress will be made at the end of 2017 and every five years thereafter.