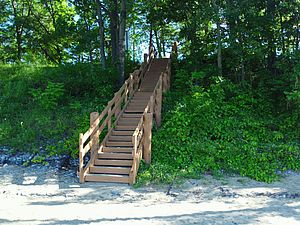 A designated staircase limits trampling of vegetation and preserves soil on slopes. Note too, gabions to left and right of staircase provide protection from erosion, but allow vegetation to grow through the wires. Photo by Mike Winslow.

In the midst of another spring of high water we remember the floods of 2011 that brought widespread devastation to the Champlain Basin. A large snow pack and extensive spring rains swelled Lake Champlain to a record height of 103.27 feet above sea level. The lake reached flood stage (100 feet) on April 13 and stayed above that level for 67 days. Lakeside homes, roads and buildings were inundated and battered by wind-driven waves. Flood damage along the lake can be caused by inundation, wind, waves, currents and ice.

Property owners use a variety of methods to stabilize eroding shoreland, but poorly designed projects can be very expensive and unattractive, and harm the lake ecosystem, without even adequately protecting the shoreline. Lake Champlain’s shore along Appletree Bay in Burlington’s New North End offers examples of successful and unsuccessful projects to treat shoreline erosion. Appletree Bay offers stunning vistas to the west across the broad lake. The views are a prime attraction and large homes have sprouted along the shore. But the broad lake generates large waves here and the area’s sandy soils are especially susceptible to erosion. Cruising along the shore one can see many examples of shoreline stabilization projects.

The Little Eagle Bay development consists of townhouses and one-bedroom flats, some of which sit right on the shore of Lake Champlain. The property managers built a massive sea-wall to protect their investment. Within a few years of construction however, the wall was tilting out over the lake and its structural integrity was weakened.

What went wrong? The wall was designed to dampen the force of lakeside waves, but the developers failed to account for the pressure of down-slope movement of land toward the lake. Erosion can be caused by water coming from the landside as well as lakeside waves. In this instance, the impervious surface created by buildings, parking areas and roads increased the amount of stormwater runoff flowing toward the lake.

Controlling shoreline erosion is complicated. All the forces acting on a particular site need to be considered. A project that fails leads to loss of money, loss of land and ecological damage. Shoreline erosion control projects should not be undertaken lightly and land owners would be wise to consult with professional engineers before proceeding. The do-it-yourself project is the one most likely to require rebuilding in just a few years.

Three preliminary steps are necessary for any erosion control project:

1) Identify the forces leading to erosion,

2) Identify potential impacts both from and to neighboring properties, and

3) Identify the vulnerabilities that cause the erosion.

Forces to consider when assessing an erosion control project include not just waves and lake level, but wind, ice and stormwater runoff from the landside. The interplay between waves and landside stormwater push a wall back and forth, loosening its foundation and weakening it over time.

The resulting cracks and tilting can be seen in scores of walls around the lake. To identify landside sources of erosion, it is helpful for landowners to go out during a rain storm and look at the property from the lakeside. Where is the water running off? This step should be undertaken even for landowners that do not currently have an erosion problem.

Lakeshore projects can have repercussions beyond just a single property. When waves come into shore at something other than a 90-degree angle, they bounce off walls, rocks and other hardened shoreline surfaces and impact the neighboring properties downwind, increasing erosion. Structures built too close to the lake can thus be destabilized by waves from the side. Walls can also cut off the supply of sand that feeds neighboring beaches. Waves that hit the shore on an oblique angle also create longshore currents which pick up sediment and carry it down shore. Over time the beaches that had developed down shore disappear once the source of the sediment is walled off. Whenever possible, erosion control projects should be coordinated with neighbors to avoid such impacts.

Vulnerabilities are often inherent with a site. Pre-existing conditions such as erodible soils, or exposure to a wide stretch of lake over which winds can blow and waves can grow increase the likelihood a given site will have erosion problems. However, the management of the shoreline also matters. According to the Lake Champlain Basin Program’s summary of the effects of the 2011 spring floods, “Shorelines with poor management, such as steep banks with little vegetation and lawns extending to the water’s edge or shoreline immediately adjacent to seawalls were especially vulnerable to erosion.”

Good vegetation management can enhance most any erosion control project, and even eliminate the need for some. Shoreline vegetation breaks the force of waves before they reach land. Clearing vegetation to create a view, building site, or boat launch will often accelerate erosion.

From a distance, the beach along Leddy Park in Burlington shows a stone base with extensive vegetation along the hillside. Upon closer inspection you see the vegetation pokes through wire mesh baskets holding the stones together, known as gabions. These can be filled with small rocks to create a large mass. They are a fairly cheap and aesthetic form of erosion control. The added vegetation improves the look of the shoreline while offering additional shoreline stability.

Limiting and minimizing access points to a beach also reduces erosion. At Leddy Beach a staircase funnels visitors to the water. However, herd paths and bike trails at other points along the beach create rills and gullies that concentrate erosion and diminish the effectiveness of the gabions. Thorny plantings at the top of the slope like roses or blackberries would discourage such haphazard beach access.

Like vegetation, beaches help dampen the force of waves. The gradual slope towards shore that beaches provide allows wave energy to be expended before hitting higher ground. Sand dunes, where they exist, act as natural sea walls in blunting the force of wind and waves. Retaining walls set back from the water allow natural beach development and increase the life of the wall by enhancing protection at the toe of the structure. Walls set at the lakeshore have a shorter lifespan and a greater negative impact on the ecology of the lake.

A strong awareness of your surroundings will improve lakeshore protection measures. Before undertaking a project, make sure you know the true causes of erosion you are trying to eliminate. Seek means to utilize your natural surroundings, vegetation and beaches, to increase a project's likelihood of success and reduce its cost. There are many resources available to help landowners with more detailed selection and planning of a project. In particular the Northwest Regional Planning Commission’s publication The Shoreline Stabilization Handbook provides an excellent overview of shoreline management techniques and guidance for choosing the right project for a given site. In the long run landowners will be well served by hiring a professional engineer to design their project.