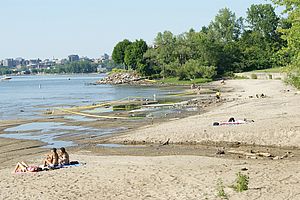 What a difference a year makes! While the spring of 2011 brought record high lake levels, the summer of 2012 will be remembered for how low the lake dropped. As of August 31 the lake stood at 94.19 feet, about a foot and a half below average for this time of year. This is the lowest the lake has been since January of 2002. Typically the lake level continues to drop until October. The lowest lake level ever recorded was in 1908, a year which recorded monthly low water records from October through January of 1909. The lowest point came on December 4th when the lake dropped to 92.61 feet.

Low water has meant more exposed hazards for navigation. Shoals usually covered by water now present a risk. At some boat launches, the water has receded from the ramps, necessitating a trip through the mud to reach the lake. Additionally, low water has meant that plants and algae growing near shore are now on-shore, often leaving stinking masses.

The dry conditions and warm weather also have some pluses. Little precipitation means less runoff and phosphorus pollution to the lake. Low water levels expose more sand at beach areas. Get out and enjoy the lake before summer is over. And for bird watchers, low water promises a banner year for shorebird migration. On a recent field trip to the Missisquoi National Wildlife Refuge for invasive plant management LCC staff saw semipalmated sandpipers, a dowitcher, and a yellowlegs in addition to the resident spotted sandpipers. A Peregrine falcon also stalked the shorebirds.