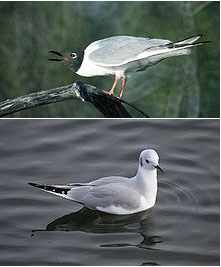 Bonaparte’s gull in both breeding and winter plumage. Photos by Wikipedia.

Starting in August and through the migration period, Lake Champlain’s smallest gull arrives, the Bonaparte’s gull. These are small graceful gulls with slender black beaks that sometimes act like terns, diving into the water. During the breeding season they sport an all black head. As winter comes on the head becomes mostly white, receding to a black spot behind the ear. Juveniles also lack the distinctive black head. Bonaparte’s gulls breed in the boreal forests of the north; they are the only gulls that actually nest in trees rather than on the ground. They were named for Napoleon’s nephew, Charles Lucien Bonaparte, a 19th century ornithologist in America and Europe.