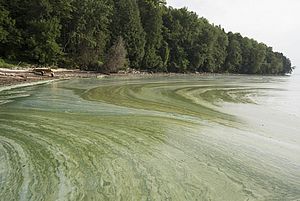 This summer marked LCC's tenth year of blue-green algae monitoring and our third year of using a visual approach. We received reports from 87 sites around the lake each week during the summer. During the season LCC volunteers and staff had submitted over 1,165 observations to the blue-green algae tracker, nearly a 40% increase from the previous year. Many thanks to our monitors who gave us consistent quality data throughout the summer. We couldn’t do it without you! (Check out who our LCC monitors, partners and funders are.)

“Lake Champlain Committee citizen monitors provide critical information that we use to better understand why and when blooms occur on Lake Champlain. It provides an easy yet unique opportunity for people to feel connected to their health and environment while making an impact for others,” said Andy Chevrefils, Environmental Health Risk Coordinator with the Vermont Department of Health.

Though blooms were prevalent in the news this year a preliminary look at the data suggests no significant difference in their frequency between this year and the previous two of monitoring. In 2014, 6% of reports noted substantial presence of algae (2% high alert – algae bloom in progress, and 3% low alert – blue-green algae present at less than bloom level), the same as the previous two years.

Reports of blooms were most likely in St. Albans and Missisquoi Bays. In fact, we received only one high alert report that did not come from one of those lake segments during the regular monitoring season (Bulwagga Bay on August 12). In St. Albans Bay, 28.8% of regular reports indicated algae alerts, either high or low, and in Missisquoi Bay 18.6%. These blooms were notable for their persistence this summer. Blooms first appeared in the last week of July and plagued the region through the end of the regular monitoring season in mid-September.

LCC’s monitoring program provides perspective on the frequency and extent of blooms around the lake, offers guidance to tourists and recreation managers, and keeps citizens informed on the state of our waters.

Blooms are caused by a combination of warm water temperatures and high concentrations of nutrients in the water, particularly phosphorus. Reducing the supply of phosphorus is key to reducing blooms. So please continue to take actions around your home and workplace and advocate for stringent controls to reduce nutrients flowing into the lake. Over the winter plans for funding lake clean up measures will be an important part of legislative discussions.