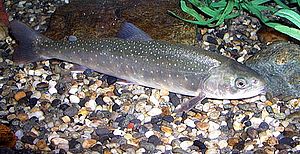 Arctic char, closely related to lake and brook trout, are a relic of the last Ice Age. When glaciers in New England receded between 10,000 and 12,000 years ago, the char colonized areas of inland New England. Other than Alaska, Maine is the only state with native Arctic char populations. This species occupies an array of aquatic habitats, from open oceans to inland rivers, throughout its geographic range. Char is a chameleon among fish: its color ranges from uniform silver to orange-red on the lower abdomen, depending on the environment and time of year. Unwanted fish introductions, such as bait fish, threaten native Arctic char populations. In Maine, the State Heritage Fish law, Trout Unlimited, the Native Fish Coalition, and the University of Maine are all working on Arctic char conservation efforts.