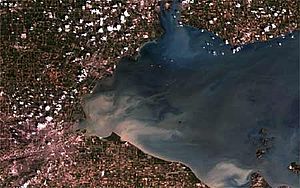 Aerial view of sediment loading from agricultural sources to Lake Erie from the Maumee River. Photo by NASA Landsat Program.

In early August, more than 400,000 residents in Toledo, Ohio were warned not to consume, cook with, or even boil their tap water due to the presence of algae toxins in their source water, Lake Erie. The ban was finally lifted a few days later on August 4.

Toledo's water supply is particularly vulnerable to algae blooms. The city sits on the southwestern edge of Lake Erie, where the water is shallowest. The Maumee River runs through the city and is the greatest contributor of nutrient pollution to the lake. Other cities on deeper parts of Lake Erie, such as Cleveland and Buffalo, were not affected.

As on Lake Champlain, the presence of algae blooms was no surprise for Lake Erie. The amount of phosphorus going into Erie has risen every year since the mid-1990s. Water quality advocates and state officials have been warning about conditions there for years. Last summer the International Joint Commission, an advisory agency made up of Canadian and U.S. officials, released a report with a series of recommendations for governments in both countries to reduce phosphorus loading. Some recommendations, like a ban on spreading manure on frozen ground or regulating phosphorus in lawn fertilizers, have already been done in the Lake Champlain Basin. Other recommendations, like a call for increased use of best management practices (BMPs) also pertain here. (LCC and other organizations are advocating that BMPs should be required for certain areas of the lake.)

Algae blooms develop each year in the western Lake Erie Basin. The National Oceanic and Atmospheric Administration (NOAA) has created a tool to predict how intense blooms will be each summer. They predicted a five or six on a ten-point scale for this summer. The worst blooms came in 2011 following tremendous spring runoff. That was the same year that spring flooding ravaged the Lake Champlain region. In-line with prediction, the bloom that has developed so far this year is not particularly large by Lake Erie standards. However, it parked directly over the water intake for Toledo about 2.5 miles off shore. Wind patterns kept the bloom concentrated there rather than spreading it around the lake. Location matters.

In Lake Champlain, some water suppliers are more vulnerable than others. The largest consumers of Lake Champlain raw water are the Champlain Water District located in South Burlington and the City of Burlington. Both of these utilities draw from deep well-mixed portions of Lake Champlain. Champlain Water District serves 70,000 people in the Chittenden County area and draws water from Shelburne Bay. The Burlington utility has its intake deep in Burlington Bay. Since blue-green algae need sunlight to survive, deep intakes are less vulnerable to blooms, and the chances of a bloom affecting these intakes is extremely low (though of course, not zero).

Some of the smaller water suppliers draw from areas of the lake more susceptible to blooms. The most at risk systems are those in the Quebec portion of Missisquoi Bay at Philipsburg/Bedford.

Some of the Vermont suppliers also have shallower intakes, so they are at greater risk of being impacted if blooms develop. Monitoring for the presence of blooms is more intense at these locations. At least in Vermont, system operators have the capability to test for toxins if a bloom develops, though even here blooms are sufficiently infrequent that testing does not occur on a regular basis. LCC has provided training for water system operators on how to detect blue-green algae blooms and continues to offer this service. LCC's monitoring program provides information to operators about the presence of blooms near their facilities. The Vermont Department's of Health and Environmental Conservation (DEC) share the results of monitoring, both theirs and LCC's, with operators every week. DEC has a written practice for detecting algae toxins in water and steps that should be taken in the event of detection.

Conventional water treatment does remove some algae cells and any toxins still in those cells. However, some processes simply break the cells and release the toxins. For example, boiling water breaks down algae cells, but does not destroy toxins. The Environmental Protection Agency (EPA) offers a summary of different water treatment practices and their impact on algae toxins.

Exposure to blue-green algae toxins causes gastrointestinal distress including nausea, vomiting, and diarrhea. When algae particles or their toxins become aerosolized by wind and waves or boat traffic, they may cause allergic like symptoms - runny nose, watery eyes, or sore throat. Some species produce toxins that affect the liver, while other species' compounds affect the nervous system.

Currently, there are no federal standards for what level of algae or algae toxins constitute an unacceptable health risk. The World Health Organization (WHO) has suggested there is no observed adverse affect of exposure to levels less than 1 microgram per liter, and many states have adopted this as their drinking water criterion. Toledo samples had 2.5 micrograms per liter.

EPA has both the responsibility and capability to develop drinking water standards for relevant algae toxins. States have been pleading for this critical assistance. In the absence of EPA leadership states have cobbled together a mishmash of different approaches for how much testing is necessary and what levels of toxins trigger concern. The Toledo experience reinforces the need for EPA to come out with clear guidance. Please use EPA's online contact form to urge them to take the lead on developing national drinking water standards for algae toxins.