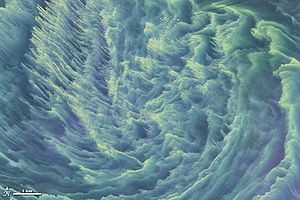 Not a Van Gogh sky, but a blue-green algae bloom in the Baltic Sea. Photo by NASA Earth Observatory.

Algae blooms have become common across the country and across the world. While some of the places they are appearing have a history of nuisance levels, in other places the blooms are considered new or rare. Here are just a few locations that have seen blooms this year:

Seneca Lake, the largest and deepest of New York’s Finger Lakes, had a confirmed blue-green algae bloom, the first confirmed event on the lake.

Blooms in Boston’s Charles River are cited as less an indication of pollution and more a sign-of-the-times with global warming playing a bigger role in widespread blooms.

Blooms on Lake Erie spread as far east as Cleveland and may become the worst on record.

A bloom on Lake Atitlan in Guatemala appears to be the first since 2009.

Satellite photos of a massive blooms in the Baltic Sea look like an abstract painting.

It’s not all blue-green algae. An unusually large and toxic diatom bloom continues in the Pacific Ocean.