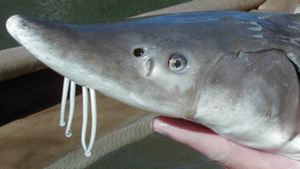 Lake sturgeon can be unintentionally caught by anglers during May and June as they head upstream to spawn in the waters where they were born. The stress incurred from being hooked can inhibit their ability to reproduce. Lake sturgeon are a threatened species in New York and an endangered species in Vermont. There is no open season for lake sturgeon and possession is prohibited, so anglers should not be targeting these rare fish. Their decline in abundance is due to past overfishing, habitat loss in their spawning and nursery grounds, and the introduction of non-native species. Lake sturgeon can live for 150 years and weigh up to 310 pounds making them Lake Champlain’s longest living and largest fish. However, it takes many years for female sturgeon to become sexually mature, and since they only spawn every four to seven years, missing a spawning opportunity can have a big impact on population growth.

State fish and wildlife experts note that if you catch a sturgeon, you should move to another area or change fishing gear to avoid catching another. If you hook a lake sturgeon, follow these practices to ensure that it is returned to the water unharmed:

Fish responsibly – your actions can help return these giant to our waters.