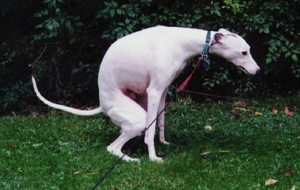 Pet poop contains bacteria and excess nutrients that are bad for our health and waterways.

What:  A springtime citizen effort to remove dog doo from our sidewalks and recreation paths

Who: You and your pals

When: April 1/April Stools Day or anytime that suits your schedule

Why: Pet poop contains bacteria and excess nutrients that are bad for our health and waterways. Dog doo left on hard surfaces washes into stormdrains any time the snow melts or it rains. From there it enters streams or the lake from which almost 200,000 people get their drinking water. The majority of water that goes through stormdrains doesn't get treated. Most pet owners conscientiously clean-up after their dogs, but pets with irresponsible owners leave reminders all around for the rest of us to deal with.

What to wear and bring: Wear old clothes and gloves and bring plastic bags. If you're working near roadways, wear a safety vest.

Sound yucky? Well, it is, but so is letting the stuff lie around. It's not good for waterways, lawns or people. Pet waste carries nutrients that feed the growth of weeds and algae in the water. EPA estimates that two or three days' worth of droppings from just 100 dogs would contribute enough bacteria to temporarily close a waterbody to swimming and fishing. Woof-waste doesn’t make good fertilizer; it burns grass and leaves unsightly discoloring. Infected pet poop can carry the eggs of roundworms and other parasites (like cryptosporidium, giardia, and salmonella) which can linger in your soil for years. Anyone gardening, playing sports, walking barefoot, or digging in infected dirt, risks coming into contact with those eggs. Children are most susceptible since they often play in the dirt and put things in their mouths.

Lend a hand by heading outdoors with some plastic bags and scooping the poop. Once you're done, flush the remains down the toilet or dispose of it in the garbage along with any other trash you find along the way. If you're a pet owner, always pick up after your pet and never leave for a walk without a plastic bag to deal with the doo.

The beauty of April Stools Day is that you can do it on your own schedule. If you're busy on Monday, plan your clean up for the weekend or another day. But “doo” lend a hand; we can create a cleaner lake if we all pitch in!