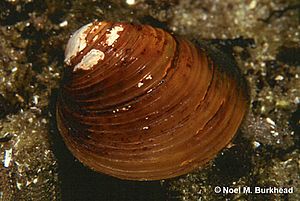 The presence of a new exotic species, Asian clam, has been confirmed in Lake George, NY. Lake George drains directly to Lake Champlain via the LaChute River. The thumbnail-sized Asian clam, blamed for clouding Lake Tahoe in the High Sierras, had previously been found in the Champlain Canal in April 2008, but has not yet been recorded in Lake Champlain.

The native range of Asian clams includes Southeast Asia, Africa, some Pacific Islands, and parts of Australia. They were first discovered in North America in 1924 in British Columbia, but it was not until they spread through the watershed of the Gulf of Mexico that they gained a reputation as an invasive species.

Asian clams are well suited for spreading and becoming a nuisance. They are very hardy so they can easily survive transport in bait buckets or live wells of boats. They have been used as bait and for human food. Perhaps most importantly, they are hermaphroditic, so introduction of a single individual can result in a new population. They have been found in portions of the Erie and Barge Canal System in New York since at least 1998.

In Lake Tahoe, Asian clam populations have exploded since their discovery in 2002. This past summer scuba-diving scientists placed long plastic mats on cove bottoms to smother the clams as part of a $1.4 million eradication campaign. Other control options for Asian clams involve use of chemicals – either chlorine or bromine or designated molluscicides. Each of these would have potential impacts on non-target species.

The principal impact of Asian clams in many watersheds has been economic. Their size and shell shape is almost perfect for clogging water intake pipes. Control of Asian clams at utilities and industrial plants to prevent clogging of pipes is estimated to cost up to $1-billion annually. Additionally, the clams can become so dense in irrigation canal systems that dredging is necessary to keep water flowing. They have also compromised concrete making. Since they are hardy, they can survive the initial mixing of the concrete and then make their way to the surface while it sets thus weakening the product. Asian clams may out-compete native species of clams, but definitive impacts have not been demonstrated. In Lake Tahoe they have also been implicated in promoting blooms of filamentous green algae on the lake bottom and fouling beaches.

However, the ability of the species to impact Lake Champlain is open to question. The clams may not thrive at more northerly latitudes. Colder temperatures seem to slow their population growth. They are restricted to shallow water areas and do not appear to survive freezing temperatures. They only reproduce at water temperatures above 60 degrees Fahrenheit, a temperature the main lake does not generally reach until mid-June. In terms of impacts, the water intakes around the lake are already coping with zebra mussels; Asian clams may not be substantially different. Zebra mussels have also decimated the native mussel fauna of Lake Champlain, so it is unclear what further impacts Asian clams might have. Yet, the potential impacts amount to little more than speculation, so there is still substantial risk in allowing another species into the basin.