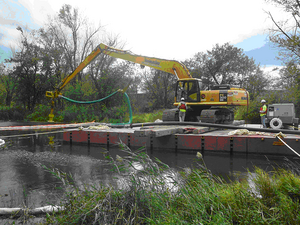 Repairs are underway to fix a leak at the Burlington Superfund site. Photo by Francisco Silva-tulla for EPA.

The underwater cap at the Burlington Barge Canal Superfund Site is being repaired to ensure that contaminants don’t migrate to Lake Champlain. The $3.5 million sand and silt cap, originally installed during 2003 and 2004, has been largely effective in preventing wastes that exist beneath the canal from moving. The pollutants are byproducts from a manufactured gas plant that converted coal to gas from 1895 through 1966. Coal tars, fuel oil, cyanide, ammonia, heavy metals and contaminated wood chips were routinely dumped in neighboring wetlands and the adjacent canal that had been built to serve area lumber yards in the 1800s. The 38-acre property bordering the lake has been a Superfund site since 1981. LCC was instrumental in developing a site remedy, creating an award-winning effort to engage citizens, scientists, environmental agencies and the businesses responsible for the waste (and the clean-up costs) in a multi-year effort to develop a solution. The parties formed a Coordinating Council that oversaw research and monitoring, investigated options, and collectively endorsed a clean-up plan protective of the environment and public health.

While the cap remedy has been largely effective, oily sheens and globules of coal tar were observed in 2005. Coal tar was hitchhiking to the surface on methane bubbles that form naturally from the peat that lies beneath the contaminants. The bubbles also create small perforations in the cap for pollutants to leak out. Absorbent booms were placed across the canal to keep any toxic material from entering Lake Champlain until a more permanent solution could be put in place.

The on-site repair consists of installing wells along the banks and replacing portions of the sand cap with one that will capture any oil and coal tar before it’s released into the canal. The restoration effort is estimated to cost around $2.6 million and be effective for about thirty years before the cap will need to be replaced. The repair affects about 1/3 of an acre of the 38-acre property. Because a large amount of hazardous waste remains in the soil, the site will be monitored by environmental officials in perpetuity.