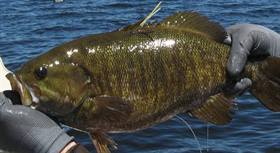 Bass are now the most popular recreational sport fish in America, and Lake Champlain has become a destination for bass fishing. In 2012, BassMaster Magazine listed Lake Champlain as the fifth best bass lake in the United States. The lake has an abundance of habitat for both largemouth and smallmouth bass. As a result, each year there are numerous fishing tournaments on the lake. These range in scale from tiny locally organized affairs to huge tournaments with sponsors, flashy boats, and tens of thousands of dollars in prize packages.

What is the impact of all this fishing pressure on the bass in the lake? That was the question posed by researchers from SUNY-Plattsburgh. To answer the question they analyzed stress levels in fish caught in nine fishing tournaments during the summers of 2011 and 2012. Indicators of stress included bloody or damaged fins, failure to raise the dorsal fins, visible hook wounds. They also tagged and tracked the dispersal of a number of fish from weighing stations in Plattsburgh.

The fish that travelled the furthest showed the greatest evidence of stress. Many tournaments have a single central weighing station. However, the best places to catch big fish may be as much as 60 miles away. For the tournaments the Plattsburgh researchers studied, over 40% of the largemouth bass were caught in the South Lake before being taken to Plattsburgh. Most smallmouth were caught within 25 miles of the weigh station.

The other factor that increased fish stress was high lake water temperatures. Warm water carries less oxygen than cold which likely exacerbates stress. Additionally, bass taken from a warm lake may be exposed to temperature shocks. At the weigh station holding tanks are frequently iced to keep them cool, so the fish would be moved from a warm lake to a warmer live-well to a cold holding tank and then back to a warm lake.

Fish brought to the weigh station did not leave the area very quickly. It took the fish between two weeks and several months to disperse from Cumberland Bay where they were released. Very few fish would cross deep waters (greater than 200 feet) so they had to disperse along the edge of the lake. Most fish moved to the northern part of the lake, not the south, irrespective of where they were initially caught. The researchers noted that failure to disperse meant the fish were exposed to much greater fishing pressure since there is such a large population base in Plattsburgh and shoreline fishing is a popular past time. Multiple captures greatly increases mortality risk for fish.

Not all the news from the study was bad; the researchers found little mortality as a result of the tournaments. They used three means to assess mortality. First, they looked at how many fish released from the weigh station died immediately. Second, they tagged a number of fish and looked for mortalities in the 48-hour period after the tournament. Third, they placed homing devices in a smaller number of fish and tracked them for 48-hours. In all cases, fewer than 5% of the fish died.

Another piece of good news is that the average bag weights of fish caught in tournaments has increased or stayed the same over the last decade. Bag weights are the cumulative weight of the five biggest fish caught by each angler. The fact that weights have not decreased suggests there are just as many big fish out there today as there were ten years ago.

The researchers did make two recommendations to ensure the long-term viability of fishing tournaments. First, they recommended that tournament organizers take steps to reduce stress for fish being weighed and released. In particular, they recommended that release boats take the fish further out into Cumberland Bay to enhance potential dispersal and reduce the risk that fish would stay near shore, susceptible to multiple captures. Second, they recommended that the states undertake a comprehensive monitoring program for bass populations. Such a program would be more likely to detect any changes in the bass population structure than is possible by simply tracking bag weights allowing managers to react before problems become apparent.

Fishing tournaments have been an economic boon for Lake Champlain and have introduced many people around the country to the great resource we have in our back yard. There is room for improvement in how they are run, but it is good to know they currently don’t seem to be having a long-term effect on the target fish populations.