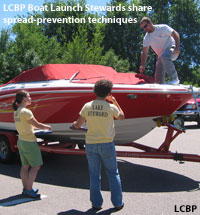 Since 2007, the Lake Champlain Basin Program has funded a boat launch steward program for the lake. The stewards interact with boaters as they are launching or removing their boats. They monitor high traffic boat launches during peak activity times during the summer, delivering a message about steps boaters can take to limit the spread of invasive species. A recent report on the 2013 season shows that most of the boaters, over 90%, only use their boats on Lake Champlain, but the other 10% come from as far away as Texas. Based on this past summer’s data, 85% of boaters contacted say they have taken steps to reduce the chances of invasive species spread and that number has increased each year. As a result of spread prevention steps, the stewards rarely actually encounter invasive species. Only 7.4% of boats inspected had any living organisms attached to them and 2.5% had invasive species. Of the invasive or unknown species encountered, 23 were on boats leaving Lake Champlain, while nine were on boats coming into Lake Champlain. While most of the invasive species found on boats were already present in Lake Champlain, stewards on Lake George did encounter Quagga mussels on at least one boat. Quagga mussels are currently not known to inhabit either Lake Champlain or Lake George. Hopefully, through efforts like the Boat Steward program and preventive actions taken by everyone who boats on the lake, we'll be able to keep quagga mussels and many other invasives from colonizing in Lake Champlain.