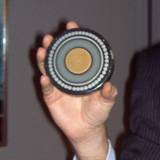 A cross section of one of the cables proposed for burial in the lake bed.

Transmission Developers, Inc. (TDI), a Canadian Company, is continuing to push for an electric power line to be placed on the bottom of Lake Champlain and the Hudson River.

The line would provide energy for the New York City area. TDI has made some changes in their preliminary design so that they would now avoid wetlands in the narrow southern part of Lake Champlain routing the line overland in that stretch. LCC had raised this concern in meetings regarding the project. TDI is currently making its case before the New York Public Service Commission and a joint proposal is anticipated by August 12th. In a recent press release the company touted support from 20 members of the New York State Congressional Delegation including Representative Bill Owens of Plattsburgh.