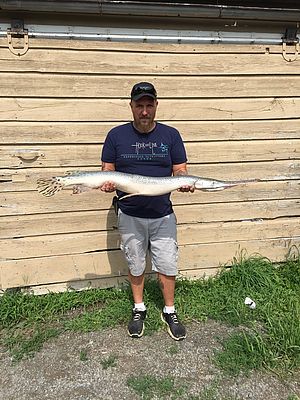 Mike Gatus’ record breaking catch of a longnose gar was nearly as long as those seen by Samuel de Champlain over 400 years ago. Photo courtesy of New York DEC.

On August 18 of this year, a man fishing for channel catfish in Lake Champlain’s South Bay reeled in a record-breaking longnose gar instead. The big fish was 52 and ¼ inches long and weighed in at 14 pounds 10 ounces, besting the 1999 New York state record by one and a half pounds. (The records are based on weight not length.)

In their press release publicizing the catch, New York Department of Environmental Conservation noted that “[e]volutionarily speaking, longnose gar are considered living dinosaurs. Their long, needle-like snout is filled with rows of teeth, making them unmistakable from any other fish species.”

An early account of this distinctive creature was made in July of 1609 by Samuel de Champlain when he first came to the Lake of the Iroquois (now known as Lake Champlain):

“There is also a great abundance of fish, of many varieties: among others, one called . . . Chaousarou, which varies in length, the largest being, as the people told me, eight or ten feet long. I saw some five feet long, which were as large as my thigh; the head being as big as my two fists, with a snout two feet and a half long, and a double row of very sharp and dangerous teeth. Its body is, in shape, much like that of a pike; but it is armed with scales so strong that a poniard could not pierce them. Its color is silver-gray. The extremity of its snout is like that of swine.”

While some have touted Champlain’s description as the earliest reference to Champ, the reality is he was describing what is surely one of the strangest fish in our fauna, the longnose gar.

All gar belong to the family Lepisosteidae which is Greek for bony scales. Longnose gar are one of seven gar species. All have diamond-shaped scales connected with peg-and-socket joints. The scales are reinforced with dentin similar to the compound in our teeth. Gar skin was used by Native Americans as arrowheads, native Caribbeans as breastplate armor, and early American settlers as a hardened coat around their plows. French gar are called Le poisson armé – the armored fish. Ancestral versions of gar have been found in the fossil record from the Permian Period 250 million years ago, making them among the oldest of fish families.

Longnose gar can be found south along the Atlantic Coast to Florida and west through the Great Lakes to Kansas, Texas, and southern New Mexico. In Vermont they are restricted to Lake Champlain and some of its direct drainages. In New York they can also be found in the St. Lawrence River, Lake Ontario, the Niagara River, and tributaries to these waterbodies. In both states the largest gar ever recorded has come from Lake Champlain: a 2007 catch of an 18-pound, 12-ounce fish from Vermont waters and a 1999 catch from Washington County, New York of a 13-pound, 3-ounce fish. The largest longnose gar can reach six feet in length, but a three foot gar is more typical.

Gar are adapted to warm waters. They can supplement gill breathing by filling their swim bladder with air at the water surface and thus persist in low oxygen waters. They are usually found in weedy areas or at the edge of aquatic plant beds.

Champlain said of the gar that it, “makes war upon all others in the lakes and rivers”, and thus bestowed upon the species a reputation as a voracious and insatiable predator. Gar are predators, they opportunistically forage on other fish and crayfish, using a sideways slash of their head to capture prey. However, they are no more aggressive in their predation than any of the other fish in the lake.

They are not usually targeted as a game fish, but their flesh is said to be tasty. On the other hand, gar eggs are poisonous. Incidences are rare, but the first was reported as early as 1851 from Illinois. The Associated Press related the story of a family from Arkansas where two men and a boy became violently ill after consuming gar eggs. The effects lingered for three days. The mechanism of poisoning is not known, but is suspected to involve a protein in the eggs.

Samuel de Champlain may not have described Champ when he visited our region but he did describe one odd looking fish. The surreal appearance of the gar, along with their unwarranted reputation as voracious predators, have led to population declines in some portions of their range, though Lake Champlain’s gar seem to be doing just fine. Chaousarou is a survivor.