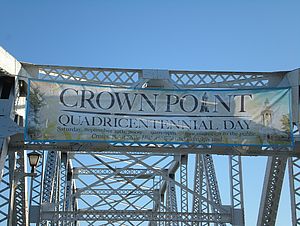 The Crown Point Bridge was closed on October 16th due to safety concerns. Photo by Lori Fisher

In late September, LCC celebrated its 46th annual meeting as part of the Crown Point Quadricentennial and Festival of Nations. The Crown Point Bridge was an integral part of the bi-state events. Thousands of participants crisscrossed the lake in cars and on foot to take in music, theater, films, and natural and cultural history programs at Chimney Point and Crown Point State Historic sites. Less than a month later, the bridge was abruptly closed indefinitely when inspectors discovered that at least two of the 80-year old concrete piers were in danger of collapse.

The effect was immediate and severe in an area where people live on one side of the water and work on the other, farms straddle state lines, and businesses have been built around cross lake traffic. Commutes have more than doubled in time and money, employees have been laid off, and some people have resorted to boating across the lake in the dark to get to and from work.

The bridge symbolizes the connectedness of Champlain Valley residents. Its closure has brought to light one fact that sometimes gets ignored – our shared reliance as a lake community. What happens on one side of the water affects the other. Recognition of our interconnectedness will not only help us address the transportation challenges at hand but should also inform all our environmental policy decisions from reducing nutrient loading to combating invasive species.