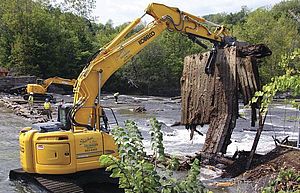 The Willsboro Dam on the Boquet River was removed in August opening over 30 miles of river to spawning by Atlantic salmon. The 125-year old dam, a relic of the area’s milling past, was falling apart. The roughly $250,000 cost of removal was around four times less than the cost of repair or replacement. Planning for the removal took over three years, but ultimately the community backed the project. The Boquet River is reported as the steepest river in New York State dropping nearly 3,000 feet of elevation over 47 miles and draining a watershed of 240 square miles. The original dam was built in the 1890s to create water power for various mill industries along the banks of the river. In 1982 a fish ladder was added to the dam, the first in New York State. As part of the project, half of the site’s fish ladder has been removed and the remaining structure is now a viewing platform. The water level will also drop several feet upriver, leaving a stretch of exposed shoreline. It will likely take a year for the river to scour out new flood patterns. The US Fish and Wildlife Service and the NY Department of Environmental Conservation will guide the Boquet River Association to revegetate the shoreline with native species to avoid the growth of invasive vegetation. Fish and wildlife officials do not expect sea lamprey to move upstream as a result of the dam removal. The old dam had become so leaky, lamprey could have been moving upstream prior to removal, and are instead impeded by the rapids on the river. LCC strongly supports efforts to remove obsolete dams and restore spawning opportunities for native fish.