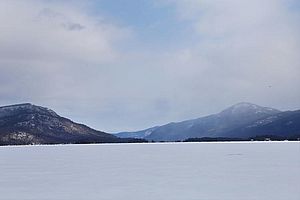 A photo of Lake George, which has frozen over only four times in the past ten years. Photo courtesy of The Post Star.

The Adirondack Park Agency hosted three researchers from Paul Smith’s College to discuss the effects of climate change on both the region and local people.

Dr. Celia Evans, Professor of Ecology at Paul Smith’s, noted that while the Adirondack region is in the temperate deciduous forest biome, it is also on the edge of several other biomes – the boreal forest, grassland, woodland, and shrubland biomes. A biome is a naturally occurring habitat for certain species. Being on the edge of several could cause the Adirondacks to see shifts in temperature and moisture sooner than the surrounding area.