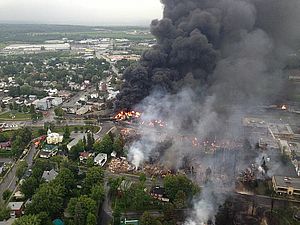 The effects of the oil train disaster in Lac Mégantic are still being felt.

In 2013 an oil train derailed and exploded in Lac-Mégantic, Quebec. The human misery that resulted was immediate. It was the deadliest rail incident in Canada since 1867 as 47 people were killed. Roughly half the town’s downtown was destroyed in the ensuing fire and the remaining buildings needed to be demolished due to petroleum contamination. The environmental repercussions are just now beginning to be understood.

Scientists have now documented an “unprecedented” spike in fish deformities in the Chaudière River which begins in Lac Mégantic as reported by the Toronto Star. During the derailment over 26,000 gallons of crude oil washed into the river. Now, as much as 47% of the fish collected since the disaster have external deformation, far above rates recorded in the last survey in 1994. Deformities recorded include lesions and infection-induced breakdown in fins.

There has also been a “marked drop” in the biomass (total weight) of fish in the river. Some of the oil spilled likely settled on the sediment of the river bed. Organisms that live on the sediment and provide a food source for fish would have been directly affected.

“There is no hypothesis other than the oil spill of July 6, 2013 that can explain these results,” the report notes. The study was undertaken by the Quebec provincial government.

Lake Champlain is at risk of a similar impact on fisheries. Oil trains run along the lakeshore, and at the peak of the crude-oil boom, the tracks carried 60 million gallons of oil each week in 20 trains with up to 100 cars each. LCC is pushing for a ban on the DOT-111 rail cars that transport the majority of this oil as they are not designed for hauling explosive liquids and are prone to puncture and leakage even in low speed accidents. The route of the rail tracks sits right on Lake Champlain in many places. The rail tracks enter New York at Rouses Point. They veer toward the lake after crossing the Saranac River, and stay there until heading east of Route 9 near the Air Force Base. They stay slightly inland until after crossing the wetlands at the mouth of the Ausable River when they once again return to the lake shore and stay along the shore until south of Willsboro Bay. From there the tracks move inland again, and parallel Beaver Brook from Whallonsburg to Wadams. Between Westport and Port Henry the tracks cross route 22A/9N and once again skirt the lake shore until reaching the southern end of the lake in Whitehall.