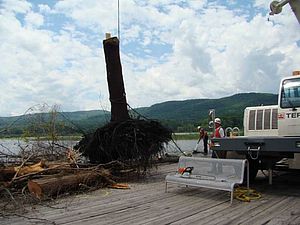 The Albany Times Union reported that this year’s lake flooding has led to some navigational challenges in the South Lake. Portions of the shoreline have broken off creating ‘islands’ as large as half an acre within navigation channels. In mid-July, the US Army Corps of Engineers used a floating crane to remove trees boulders and other debris from the lake at Maple Bend in Dresden; the result of a landslide reported on July 6th. Additional large segments of shoreline broke free and started floating in South Bay. According to Dave Winchell of the New York Department of Environmental Conservation, the largest of these segments has come to rest against a jetty leading to the South Bay fishing pier, while it is unclear what happened to the other pieces.