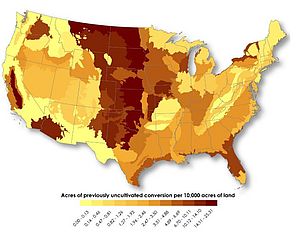 This map depicts trends in land conversion triggered by the ethanol standard. Courtesy of Lark et al, University of Wisconsin.

A new report by our friends at the National Wildlife Federation outlines how the federal mandate to blend corn-based ethanol into conventional gasoline has degraded waters and destroyed wildlife habitat across the country. Passed in 2005, the mandate increased the demand for corn and resulted in a major transformation on the landscape. Farmers, hoping to take advantage of rising prices for corn and other commodity crops, converted more than seven million acres of native prairie, rangeland, wetlands and forests into cropland resulting in a significant loss of wildlife habitat and critical ecosystem functions like water filtering. The destruction occurred in large part because of government's refusal to enforce a provision in the law prohibiting this type of land conversion.

As the report outlines, requiring the use of corn-based fuels has provided little, if any, of the promised reduction of greenhouse gas emissions that were supposed to make it a model environmental statute. Instead it led to more cleared land and drained wetlands and increased the use of fertilizers, pesticides and irrigation water to maximize production. The loss of buffer strips and wetlands that filter storm and pollutant runoff paired with a rise in the application of chemicals have contributed to declining water quality in waterways throughout the country.

Today American farmers grow more corn than at any time since the Great Depression and 40 percent of that crop goes to produce fuel rather than feed people or animals. Last month, Rep. Peter Welch (D-VT) renewed his commitment to reform the federal ethanol mandate by reintroducing the bipartisan Renewable Fuel Standard (RFS) Reform Act and the Food and Fuel Consumer Protection Act. The latter would cap the maximum volume of ethanol blended into the transportation fuel supply at 9.7 percent.