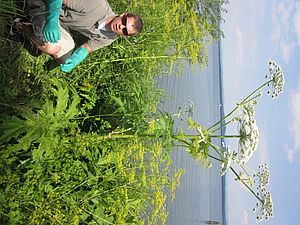 An astute resident found a new population of an invasive species near the ferry dock in Essex, NY. The plant, giant hogweed, is a federally listed noxious weed within the carrot family. Exposure to its sap can cause severe skin irritation, blistering, scarring and even blindness. The plant can grow up to 12 feet in height. Dr. Alan V. Tasker, of the U.S. Department of Agriculture’s National Noxious Weed Program, says people can distinguish giant hogweed from other species of the carrot family, not only by its gargantuan size, but by its purple-splotched, hairy stems. “Cow parsnip stems have a more ‘furry’ look to them, whereas the hogweed has long, white hairs which are most pronounced at the base of the leaf petiole (stem). But the foliage of cow parsnips and giant hogweeds before they send up flower stalks is so similar it’s almost impossible to tell them apart.”

Giant hogweed is a native of the Caucasus Mountain region between the Black and Caspian Seas. It was introduced to Europe and the United Kingdom in the late nineteenth century and to the United States in the early twentieth century as an ornamental garden plant. It has become established in New York, Pennsylvania, Ohio, Maryland, Oregon, Washington, Michigan, Virginia, Vermont, New Hampshire and Maine. Seeds may also be distributed by birds and waterways, and can remain viable for over 10 years.

NY DEC working in collaboration with town officials and The Nature Conservancy began immediate efforts to eradicate the Essex population and prevent its spread.