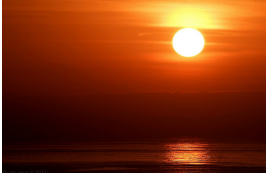 Our region is experiencing record-breaking heat this summer. A paper recently published in Nature finds that the world is warming more quickly than most models predict. Photo by Bruno Amaru.

From July 18 to August 16, a stretch of 29 days, the daily high temperature in Burlington, Vermont never fell below 80 degrees F. The streak eclipsed the previous record for consecutive days over 80 by four days. Keep in mind, the streak of hot days began AFTER temperatures climbed into the 90s for six straight days earlier in July. During that heat streak the region set another record, the highest ever daily low temperature of 80 degrees.

Globally, 2018 is on track to be the fourth hottest ever. Only the previous three years have exceeded it. In fact, since record keeping began in 1880, seventeen of the eighteen hottest years have occurred since 2001. Earlier this year a global record for the highest daily low temperature was set in the Middle Eastern country of Oman, 108.7 degrees on June 26. .

A paper recently published in Nature finds that the world is warming more quickly than most models predict. “The computer models grow more precise; the regional analyses sharpen; estimates solidify into observational data. Where there have been inaccuracies, they have tended to be in the direction of understatement,” wrote Nathaniel Rich in the NY Times Magazine

“We are living in a world that is not just warmer than it used to be. We haven’t reached a new normal,” Daniel Swain, a climate scientist at the University of California Los Angeles, cautioned recently. “This isn’t a plateau.”

One reason this isn’t a plateau is that greenhouse gas emissions continue to increase. Industrial emissions of carbon dioxide were higher in 2017 than ever before. The U.S. has pulled out of the Paris Accord, an international agreement to curb greenhouse gas emissions, and other countries are failing to meet the goals they set for themselves in the agreement. All told, more carbon has been released into the atmosphere in the last thirty years “than in the entire history of civilization preceding it,” according to Rich.

What we are experiencing has been predicted for many years. As Rich described, “Nearly everything we understand about global warming was understood in 1979. By that year, data collected since 1957 confirmed what had been known since before the turn of the 20th century: Human beings have altered Earth’s atmosphere through the indiscriminate burning of fossil fuels. The main scientific questions were settled beyond debate, and as the 1980s began, attention turned from diagnosis of the problem to refinement of the predicted consequences.” Consequences abound.

A study released in July predicted an increase in extreme heat events would lead to a five-fold increase in mortalities in the United States by 2080. Locally, four people died of heat related illnesses during the early July hot spell.

The greatest impacts of global warming will be seen along the oceans as sea levels rise. More energetic storms coupled with higher water levels make storm surges worse. Coastal sea levels have already risen one foot since 1900 and may rise up to 4 feet more by 2100. A sea level rise of two feet more than triples the frequency of coastal flooding without any changes in storms. We have seen the effects with flooding from massive hurricanes like Katrina, Sandy, and Harvey.

However, damage from winter storms will also become worse. The highest and third highest water levels ever seen in Boston occurred during winter storms that occurred in 2018 according to National Oceanic and Atmospheric Administration.

Flooding will not be limited to major storms. High tide flooding could occur several times per week by 2045 in one-third of the areas studied, and a 10-fold increase in flooding in half the areas studied “We are already seeing flooding in property and the streets in Charleston, Norfolk and Miami on sunny days, driven by the tides. That is a looming crisis that is only going to grow more severe over time.” William Sweet, an oceanographer at NOAA quoted in The Guardian. Today’s coastal flooding is tomorrow’s shoreline.

Coastal flooding will endanger infrastructure critical to our nation’s economy. A study released in July of this year warned that within 15 years thousands of miles of buried fiber optic cable in densely populated coastal regions of the United States may be inundated by rising seas. New York, Seattle, and Miami were considered the most vulnerable.

Close to home, increased Lake Champlain water temperatures will increase the likelihood and severity of blue green algae blooms. A literature review found that an increase in water temperature from 75.2 degrees to 76.6 increased the probability of algae blooms by 5%, roughly equivalent to doubling phosphorus concentrations in the Main Lake. As our climate warms, lake temperatures reach this threshold earlier in the season and remain there longer into the autumn. Therefore, blooms start earlier, last longer, and have the potential to grow larger.

Addressing global warming is a question of politics and economics, not science. Any attempt to answer the question leaves winners and losers.  Rather than actively choosing to pursue strategies to combat the problem, society has passively allowed the situation to worsen.  Consequences of avoidance were once in the future, but now they manifest daily.