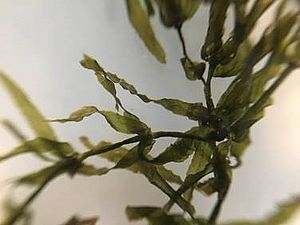 Hydrilla is named after Hydra, the nine-headed serpent of Greek mythology because it can grow a new plant from a tiny stem fragment. Photo from Lake Champlain Basin Program.

In early September, Lake Champlain Basin Program Boat (LCBP) Launch Steward Matthew Gorton was conducting a routine boat inspection for invasive species prevention at a public access site in South Hero, Vermont when he noticed an unusual plant hanging off a boat trailer backing into the lake. Gorton checked the boat and removed the plant specimen, which he later relayed to the Northeast Aquatic Plant Management Society and ultimately sent to the University of Wisconsin-Whitewater for genetic analysis. Results confirmed the plant as Hydrilla verticillata, a particularly aggressive aquatic invasive.

Lake Champlain now hosts 51 known non-native or invasive aquatic species but hydrilla has yet to be found in the lake. Thanks to Gorton’s actions, that’s still the case. The watercraft carrying the plant to South Hero had come from the Connecticut River where established populations were first discovered in the river’s main stem in 2016.

Where does hydrilla come from?

Native to parts of Asia, Africa and Australia, Hydrilla verticillata was first introduced to the United States in Florida in the 1950s or 60s as an aquarium plant. It can be easily dispersed by plant fragments attached to boats, trailers, bait buckets, fishing lines or through tubers that are consumed and excreted by waterfowl. By the 1970s, it had invaded every major drainage basin in Florida. It’s now found in over 30 states from Florida to Connecticut and west to California and Washington, with the most severe occurrences found in the Gulf and South Atlantic States. In the Northeast region there are significant efforts in Cayuga Lake and the Croton River in New York to treat hydrilla infestations and prevent further spreading. New England states are collaborating to survey the Connecticut River system for further populations. Smaller hydrilla colonies have been found in waterbodies in Maine, Connecticut and Massachusetts.

Hydrilla colonizes aggressively, forms dense mats of vegetation, easily outcompetes and displaces native plants, alters aquatic habitats, and interferes with recreational activities. Aquatic invasive species are diverse, but they all have one thing in common: they are very difficult to control once established. Since human conveyance is a key factor in how they are spread, the LCBP Boat Launch Steward program and other educational efforts are key to protecting Lake Champlain and other waterways from infestation.

Since the Boat Launch Steward Program began in 2007, stewards have greeted nearly 250,000 boaters and intercepted 5,400 invasive species. The majority of these organisms have been found on boats leaving Lake Champlain, and could have been carried to other water bodies in the region if not intercepted first. The steward program is supported with funding provided by the U.S. Environmental Protection Agency (EPA) and Great Lakes Fishery Commission (GLFC) that is allocated by the Lake Champlain Steering Committee.

Stewards around Lake Champlain work mostly from Memorial to Labor Day weekends at launches on Lake Champlain in New York, Vermont, and Québec. The interception of this plant fragment after Labor Day suggests that there is a need for watercraft inspection and decontamination later in the season. Boat Launch Stewards encourage boaters to clear their watercraft and equipment of aquatic invasive species in an effort to protect the Lake’s ecosystem, recreation opportunities, and local economies.

What does Hydrilla look like and how does it grow?

Hydrilla is a submerged, rooted perennial with stems up to 30 feet in length that branch at the surface and form dense mats. The plant looks similar to a native aquatic plant, Elodea canadensis, which is common in many New England lakes and rivers. However, hydrilla is different in that it has serrated or saw-toothed edges on the leaves and often has leaves in whorls around the stem with four to eight leaves per whorl. Leaves are bright green and about 5/8 inches long with usually reddish midribs with one or more sharp spines. The plant has small, white to yellowish, potato-like tubers attached to the roots.

Named after Hydra, the nine-headed serpent of Greek mythology because it can grow a new plant from a tiny stem fragment. It only takes a one-inch plant segment to start a new infestation. Growing up to a foot a day, and having the ability to reproduce through fragmentation, tubers, turions and seed, hydrilla can readily outcompete native plants for territory. Hydrilla forms dense vegetative mats that crowd out other plants and can cause stagnant water conditions which provides breeding territory for mosquitos and diminishes habitat for diverse fish and wildlife populations. In some areas of the country where hydrilla is established anglers have found a decrease in the size and quantity of fish. The mats and extensive stands that characterize its growth habits also obstruct boating, swimming and other water-related recreation as well as interfere with water supply. It’s an extremely hardy plant that can grow in both nutrient-rich and nutrient-poor waterbodies and in low light levels easily outcompeting native plants for space.

Gorton’s actions kept hydrilla out of Lake Champlain that September day but all of us who recreate on and around waters share in that stewardship responsibility.

How you can help with spread prevention

To prevent further spread, make sure that you follow good invasive species prevention practices when moving watercraft or other recreation gear from one body of water to another. To minimize the potential spread of hydrilla and other aquatic weeds, follow the simple steps below.