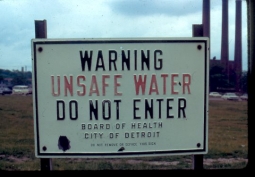 A health warning sign off the Detroit River circa the 1960s. Photo from Outdoorhub.

Dr. David Strayer, freshwater ecologist at the Cary Institute of Ecosystem Studies, shares his thoughts about why any efforts to repeal the EPA rule that defines waters of the United States (WOTUS) should be resisted, especially if you care about the health of our nation's lakes, rivers, streams and wetlands. The opinion piece below first appeared in the Times Union of Albany, NY. Our thanks to them, David and the Cary Institute for permission to share it.

When Scott Pruitt takes the reins of the Environmental Protection Agency, we can expect him to dismantle federal environmental protections. Among the protections that he would like to roll back is the recent rule defining the "waters of the United States" under the Clean Water Act. Repealing this rule would cut the heart out of the Clean Water Act, effectively handing our waters back to big polluters. This should be resisted.

Growing up along the shores of Lake Erie in the '60s, the lake and surrounding rivers were polluted by industrial, agricultural, and municipal wastes of the most appalling variety — I saw oil slicks and old condoms and sour-smelling river water the color of cardboard. When this pollution killed fish and waterfowl, or made the beaches unsafe for swimming, the polluters at most received small fines — far less per fish than I would have been fined for taking a few fish out of season. By the time I was 12 years old, I understood what this meant — the lake and rivers belonged to the steel companies and the paper mills to use as they pleased.

Lake Erie was not an isolated case. Here in New York, sewage from millions of people was dumped essentially untreated into the Hudson, along with a rich brew of metals, oil and other toxins from industry. Fish kills were common, and high concentrations of intestinal bacteria in much of the river made the water unsafe for even incidental contact (e.g., fishing).

The condition of our waters finally became so bad, with burning rivers and dying lakes, that the rightful owner of those waters, the people of the United States, reasserted our claims through the Clean Water Act in 1972.

Although sometimes portrayed as a radical coup by the environmental left, the Clean Water Act had broad bipartisan and geographic support. The final bill passed the Senate 74-0 and the House 366-11, including overwhelming majorities of both parties and majorities in the congressional delegations of every state. And despite its flaws, the Clean Water Act has been essential in stopping or reversing further deterioration of water quality in many lakes and rivers (the Hudson, for example, is now safe for swimming much of the time and widely used for all kinds of recreation).

A central issue with the Clean Water Act is that it claims authority over the "waters of the United States" without explicitly defining that phrase. Congress had the authority under the Commerce Clause to protect bodies of water that were navigable or crossed state boundaries. But it is clear from the language of the Act that they also meant to protect the tributaries of these waters — they understood that you can't keep a river clean if the streams that feed into it are being polluted. But how far upstream does federal authority extend? A little up the tributary, all the way to the mountaintop, or somewhere in between?

Such ambiguity led to the courts, where the Supreme Court ruled in 2006 that only bodies of water with "a significant nexus" to protected waters were included as "waters of the United States". To clarify what waters would be covered under the Act, the EPA and Army Corps of Engineers issued a detailed rule last year that defined what would be included or excluded. This rule was carefully developed and exhaustively reviewed, is consistent with prior application of the Act and legal precedent (including the "significant nexus" test), and is supported by a large body of scientific knowledge.

Nevertheless, the rule was attacked by polluters, especially Big Agriculture, even though many agricultural activities are specifically exempted from the Act. Agriculture undoubtedly finds the Clean Water Act to be burdensome, because no sector of the U.S. economy uses more water or pollutes more lakes and rivers than agriculture. Agricultural pollution has been blamed for the toxic algal blooms that shut down Toledo's water supply and the excessive nitrate that threatens Des Moines' drinking water and damages populations of fish and wildlife all across the country.

Rolling back the protections of the Clean Water Act would allow agriculture to pollute more waters and roll out the red carpet for other polluters. And we all would be left paying the price, as the quality of drinking water degrades, beaches close, lakes and rivers fill with algal scums, waterfront businesses and property values suffer, and fish, birds, and other wildlife disappear.