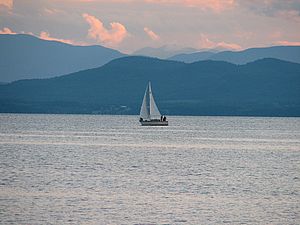 Lake Champlain has been designated a national ‘Great Water’ through the America’s Great Waters Coalition. The Coalition was launched in December 2009 by the National Wildlife Federation and an Alliance of more than 30 national, regional, state and local organizations to protect, preserve and restore America’s Great Waters. Lake Champlain now joins Chesapeake Bay, the Everglades, the Great Lakes, the Gulf of Maine, Long Island Sound, the Mississippi River, and San Francisco Bay as a ‘Great Water’. To earn the designation, waterways had to be of a certain size and scale, have a comprehensive restoration plan in place or in development, and have organized stakeholder involvement.

“It’s clear that Lake Champlain meets the requirements and deserves to be included,” said Lori Fisher, LCC Executive Director who wrote the application to get Lake Champlain considered. “It is a nationally significant waterbody, with extensive community involvement in the restoration and protection efforts underway. We look forward to working with Coalition members across the country to increase funding and support for Lake Champlain and other precious waterways that sustain people, wildlife and the economy.”

Senator Leahy said, "It isn't news to Vermonters that Lake Champlain is 'great.' And this is more great news if it helps us to secure more resources and attention for the conservation and restoration of Lake Champlain.”

The Lake Champlain Committee will be working to do just that as a member of the Great Waters Coalition. “The goal of this effort is to make the restoration and conservation of our waterways a national priority,” said Fisher.