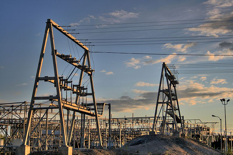 Does it make sense to place power lines and other energy transmission projects at the bottom of Lake Champlain? Photo from Wikipedia.

Two recent proposals have shown that Lake Champlain is likely to be in the center of our region’s future energy transmission network. One project proposes to lay a power line at the bottom of Lake Champlain to transmit energy from large hydro-electric dams in northern Quebec to power-hungry consumers in the New York City region. The second project would connect the Ticonderoga Paper Mill to a proposed natural gas pipeline being extended from northern Vermont ultimately to Rutland. With neither project is it entirely clear whether the risks to Lake Champlain outweigh the benefits.

The American lifestyle extravagantly consumes energy. We have come to expect the lights to go on at all times, the microwave to be there for dinner, and instant access to the internet from anywhere. Americans use more than twice as much energy per capita as do Europeans. The New York Times recently reported on the vast amounts of energy needed just to store data so that it is available for retrieval at any time. As more people shift to saving data in the cloud, the energy demands at data storage centers increase.

The underwater power line, referred to as the Champlain Hudson Power Express, has been under study for a few years now. The project would not be installed until 2017 and would likely cost about 2.2 billion dollars to construct. The power line would use not only Lake Champlain but also the Hudson River as a transmission corridor. It is currently under consideration by the New York Public Service Board (the route avoids Vermont portions of the lake bed). Opposition has come from small scale energy producers in New York but many environmental groups have been quietly supportive. During the review stage, LCC successfully advocated for a route that would avoid wetlands and the IP sludge bed and for the establishment of an environmental reparation fund.

The idea for an underwater natural gas pipeline to Ticonderoga arose more recently. Vermont Gas was already considering extending its pipeline from Chittenden County to Addison County in Vermont when it was approached by International Paper (IP) about the possibility of building a spur line under Lake Champlain. IP has been searching for a means of lowering fuel costs for some time, and it estimates that gas would be 43% cheaper than the fuel oil it currently burns. IP and Vermont Gas have agreed to share the costs of engineering and environmental studies for the project.

Both Lake Champlain projects would create short term disturbance and long term risks for Lake Champlain. In the short term, sediments would be stirred while the project is being installed, re-suspending phosphorus in the process. However, recent reports on the gas pipeline project suggest they would be using directional drilling, a technique that can avoid lake bottom disturbance by placing the pipe well below the lake bed. In the long term, there is a chance of failure in either project. A leak in the gas pipeline would clearly present an ecological problem. It is not as clear what a failure in the electric transmission line might mean to Lake Champlain.

However both projects offer environmental benefits as well, though not necessarily to the lake. An electric transmission line under the lake avoids the need to clear an overland route, thus preventing a great deal of habitat fragmentation for terrestrial animals. The electricity generated from hydro-power does not contribute to global warming. The gas pipeline would allow IP to switch from more-polluting oil to relatively cleaner natural gas, thus reducing both greenhouse gas emissions and particulate emissions.

On the other hand, both projects also have environmental costs that extend well beyond Lake Champlain. The large scale hydro dams feeding into the Champlain Hudson Power Express, require the flooding of extensive portions of Quebec wilderness and restrict the free-flow of water in rivers. Cheap natural gas has come about due to the hydraulic fracturing, an extraction method that has been blamed for contaminating groundwater and even causing small earthquakes. Gas prices dropped in half between 2008 and 2009 and have remained low since then. The Vermont Legislature recently passed a moratorium banning fracking from the state due to concerns over environmental impacts. Continued availability of cheap energy in any form reduces the incentive to develop energy conservation measures.

All energy choices involve tradeoffs of environmental damage whether from air pollution, habitat destruction, or adding carbon to a warming atmosphere. The consequences for Lake Champlain from these two projects vary, but impacts to the lake are a small part of the overall environmental cost benefit analysis of the projects.