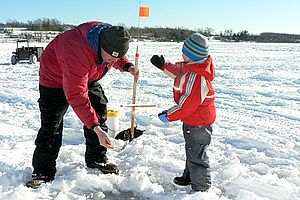 Ice fishing is a fun winter activity and both VT and NY offer clinics to help you get started. Photo by Vermont Fish & Wildlife Department.

There is great potential behind a hole in the ice. On Lake Champlain, those holes are often related to ice fishing. You can make ice fishing what you want it to be: a social or solo activity, over a short or long timespan, and on open ice or under the cover of a shanty. No matter the approach, it’s an activity that gets folks outside and interacting with the natural world in the wintertime.

Ice fishing checked all of the winter activity boxes for Vermonter, Nick Sibley, and his family: fun; food; quality time spent with one another, friends, or your own thoughts; and affordability. There’s not a huge economic barrier to entry associated with ice fishing, compared to other winter sports like skiing, Nordic skating, or snowshoeing. A Vermont or New York resident can ice fish for under 50 dollars, which includes a fishing license (no license is required for individuals under the age of 15 in both states), jig stick (an apparatus with fishing line and two hooks attached—a simplified fishing rod), and bait.

Jigging is a type of fishing technique typically used in deep waters. When applied to ice fishing, the line is dropped through the hole. Jigging entails an action where you yank up on the whole line when you feel a bite. This technique hopefully hooks the fish. Traditionally, there’s not a reel attached to the stick, so you pull up on the fishing line hand over hand, until the fish emerges through the hole in the ice.

Nick grew up ice fishing, with the jigging technique, along the Georgia Shore of St. Albans Bay and at Sandbar State Park in Milton. “My dad took me ice fishing when I was six years old. He drilled a hole and set me up with a jig stick and bait. Within a few minutes, I snagged my first perch. It is my earliest memory of seeing a fish up close. I know they’re small, but at the time, I thought it was huge! It came up through the hole and awakened my curiosity for life below the ice.”

The morning of his “big catch,” Nick woke up to prepare for the day, like any other day on a frozen section of Lake Champlain. He and his family dressed in warm clothes, which is essential to staying safe and comfortable during potentially long stints of sitting or standing between catches or drilling holes. They loaded buckets, sleds, jig sticks, and bait—in this case, nightcrawlers and minnows—into their pick-up truck with their minds set on the prize: yellow perch and northern pike.

When they arrived along the Georgia Shore, there were four wheelers, shanties, and a truck on the ice: a good sign that the ice was safe to walk and fish on, and the fish were biting. They hauled their gear onto the ice with sleds. Five-gallon buckets are the most versatile of the gear items: they carry tackle, hold bait, act as a place to sit, and transport fish home. When they settled on a section of the ice, Nick’s dad drilled three holes through the ice with an ice auger: one for Nick, one for Nick’s brother, and one for himself. Over a period of three hours, the team caught a pile of fish, including the first catch of Nick’s lifetime.

Nick’s family ice fishes for enjoyment and the potential of eating a well-earned meal together. “I know folks who rely on it for winter sustenance and income, too,” says Nick. That day, his dad and siblings caught enough fish for dinner. At home, they dumped the pile of perch—no pike were caught that day—on the newspaper-covered kitchen table. As a family, they dressed the perch, which entails a sequence of specific knife cuts to prepare this species of fish for cooking. With the spine, ribs, tail, and flesh attached, his mom breaded and pan fried the fish in butter and garlic—simple and delicious.

Nick’s passion for fish carried through to adulthood. He worked for the U.S. Fish and Wildlife Service for four years in Michigan and Vermont. His childhood ice fishing experiences contributed to his interest in the natural world and passion for the outdoors. His first catch through a Lake Champlain black hole hooked him on biology and ecology for life. Nick believes that people are more likely to protect organisms that they understand. Ice fishing is an opportunity for folks to get to know a part of the lake that may be less familiar.

Not convinced to start ice fishing? Consider Nick’s pitch: “It’s a great way to get outdoors, do something new, and see the lake from an angle you don’t normally see it from; it’s hard to describe how beautiful it is out there, so you have to get out and see it for yourself!”

There are many opportunities to learn how to ice fish in Vermont and New York, including the Free Winter Fishing Clinics hosted by the Vermont Fish & Wildlife Department and the Free Fishing Days in New York. There are many events during the month of February & March:

Registration is required for all programs. The programs last around three hours. For more information, visit the Vermont Fish & Wildlife Department website, call 802-265-2279, or email letsgofishing@ vermont.gov. In New York, the upcoming wintertime Free Fishing Days fall on Presidents’ Day weekend: February 15 & 16. Find out more via the New York State Department of Environmental Conservation website. No fishing license is required for any of the above events.

For more background information on ice fishing, check out LCC’s article, The Basics of Ice Fishing on Lake Champlain.