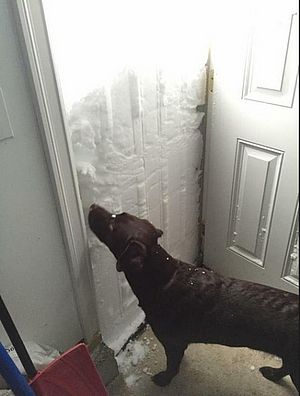 Earlier this month lake effect snows dumped over seven FEET of snow around Buffalo, NY. Roads were closed for days; at least 30 roofs collapsed in Erie County; and at the latest toll 13 people had died as a result of the storm, many due to heart attacks caused by trying to move all the snow. Early winter is when massive lake effect snow storms hit western and central New York. Cold north winds blow across the length of Lake Erie or the wide stretch of Lake Ontario accumulating moisture and then dumping it over land. Lake Champlain isn’t big enough to generate such massive storms, but it can occasionally produce local lake effect snows. One of the more dramatic lake effect snow events along Lake Champlain dumped 13 inches in Cornwall, VT in November of 1996.

By definition, lake effect snows occur only under conditions where no snow would be generated in the absence of the lake. Three conditions must be met for lake effect storms to form. First, a cold air mass must move over warmer water. Second, the temperature difference between the air in the upper atmosphere and water must be fairly high. In a study of eight incidences of Lake Champlain-induced snow the upper atmosphere ranged between 2,000 feet and 16,000 feet depending on air pressure. However, if the differential is too great, the upper air may be too cold to hold much water and snows will be only minimal. Third, the two air masses must stay in contact long enough for the air to absorb moisture. The amount of time the two air masses stay in contact is determined by wind speed, wind direction, and the width of the water body. If wind speed is too high, then the upper cold air layer moves through without having enough time to absorb water. Wind direction and water body width serve as limiting factors for lake effect snows on Lake Champlain.

Since Lake Champlain is asymmetrical, 124 miles long but at most 12 miles wide, winds coming from near due north are most likely to cause lake effect snow. They stay in contact with the water long enough to absorb water and are more likely to be cold enough to produce snow. The distance with which wind can blow across a water body (or other geographic feature) without being interrupted is known as its fetch, and the fetch between Burlington and Port Kent, not to mention Plattsburgh and Grand Isle, is too short for weather from the west to generate snow.

Lake effect snow is often most intense right near the shore. Once warm moist air hits land, it slows down because the friction of land is greater than that of water. However, there’s still more wind coming from behind and all the air has to go somewhere. It begins to rise into the cooler atmospheric layer above, forming snow.

In addition to pure lake effect snow, there are also more frequent lake-enhanced events. These occur when already existing storms become more severe in localized areas due to the influence of the lake. At times, lake-enhanced snow can cause white-outs when only minor flurries had been predicted.