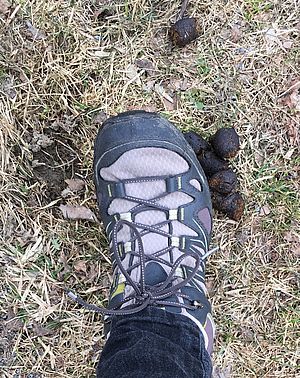 Leave your dog’s doo behind and it’s likely to get underfoot. Do your “dooty” pet owners and pick up after Fido. Photo by Lori Fisher, © Lake Champlain Committee. 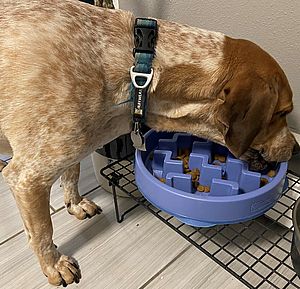 Lio, one of LCC’s canine members gets most of his food from a bag. The kibble is good for him but the poop from such nutrient-enriched feed is bad for waterways. Photo by Anya Rose. © Lake Champlain Committee.

Deserted dog doo is a nasty addition to the bottom of an innocent passersby’s shoe—and to Lake Champlain. Canine feces left on hard surfaces like a sidewalk or compacted soil can wash into storm drains during any precipitation event. From there, they enter streams or the lake, which nearly 200,000 people rely on for their drinking water. Most pet owners conscientiously clean-up after their dogs, but those who don’t create an issue for people and waterways.

That impact on waterways was the reason the Lake Champlain Committee (LCC) began organizing April Stools’ Day events over a decade ago. The intent was to enlist citizens in scooping the poop before spring rains washed it into waters and to raise awareness of the effects pet poop has on water quality and foster better stewardship.

“Though dog poop can seem natural,” LCC Executive Director Lori Fisher notes, “there are several reasons why it shouldn’t be left behind after a dog does its business. First, most dogs are fed a nutrient-enriched diet from a bag, whereas wild animals consume food like berries and nuts from the ecosystems they roam in. Wild animal scat fertilizes the soil and helps to disperse native seeds, whereas dog doo is high in nutrients such as phosphorus and nitrogen, which can fuel the growth of algae and cyanobacteria in water. Second, dog poop is host to a myriad of parasites or bacteria that can cause human diseases.” The concentration of bacteria in dog poop—23-million fecal coliform bacteria per gram—is 10-times more per pound of body weight than cows produce. The Environmental Protection Agency (EPA) estimates that two or three days' worth of droppings from 100 dogs contributes enough bacteria to temporarily close a waterbody to swimming and fishing. Infected pet poop can carry roundworms and other parasites or bacteria, like Cryptosporidium sp., Giardia sp., Salmonella sp., and Escherichia coli (also known as E. coli), which can linger in soil for years. Folks gardening, playing sports, walking barefoot, or digging in the infected dirt risk becoming infected. Children are most susceptible, as they often play in the dirt and put things in their mouths. Citizen volunteers, scanning sidewalks and recreation paths for poo, can help reduce the impacts of pet waste on humans and waterbodies.

LCC annually organizes April Stools’ Day events throughout the Lake Champlain watershed, collaborating with businesses, municipalities and hundreds of citizens to keep thousands of pounds of dog poop out of our waterways. Those events won’t be held this year as we all work to flatten the curve of Covid-19 infection by avoiding gatherings, physically distancing, and staying home. But you can still participate in scooping the poop! Head out on foot to a nearby park, trail, or neighborhood with gloves, plastic bags, and a sturdy trowel to help pick up dog feces you see decaying on pathways. Take a selfie of you doing your good “dooty” before depositing your bags in the trash. Register your action via LCC’s online form to be entered into our prize drawing! You could win an LCC gift membership, a gift certificate to a local veterinarian, a Planet Pack or other cool options.